With its striking looks could the Volvo S90 be a threat to its German and English contemporaries? We take it for a test drive to find out. Video: Neil Briscoe 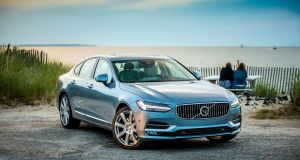 The S90 has shaken up the German luxury car market

If we said that the new S90 and V90 were the most iconic Volvos since the original 245GL, would that count as damning with faint praise? Possibly so, but the new big Volvo saloon and estate represent probably the biggest break from the old boxy but good image of Volvo yet seen.

While the original S80 and C70 introduced curves to Volvo’s styling, the new 90s take the next giant leap, and introduce genuine desirability. That was easily done with the big XC90, because everyone wants an SUV. Adding as much “want one” to a sensible Swedish saloon is a rather bigger task.

True, neither is as good to drive as an equivalent BMW 5 Series or Mercedes-Benz E-Class, and the ride quality on basic models could certainly be better, but the fact is that the S90 and V90 have given the biggest shake-up to the German luxury car hegemony since Lexus was launched. No mean feat, that.