Lost in grandeur with Jean-Paul Gaultier in `The One' 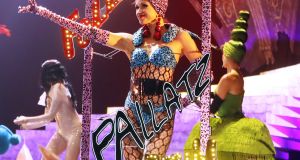 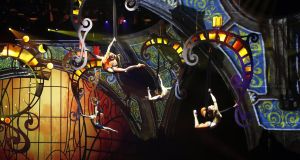 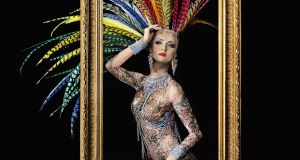 A highlight was the creative lighting of Peter Morse, go-to lighting director for Madonna, Prince, Michael Jackson and Barbra Streisand 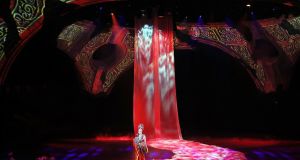 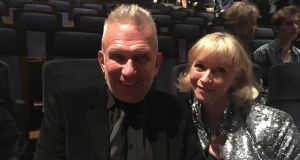 Some of the show’s dizzyingly inventive scenes are choreographed by Berlin-based Irishwoman Marguerite Donlon, pictured here with Jean-Paul Gaultier who designed 500 costumes for 60 dancers as well as the lead cast 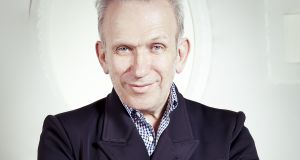 Jean-Paul Gaultier: ‘It’s been such a fabulous experience, I just love it,’ `he declared on opening night

Berlin is a city of ghosts and nowhere is the German capital more haunted than the Friedrichstrasse. Running north to south through Berlin’s historic city centre, what was once a hopping amusement mile is today a soulless stretch of fast-food outlets and offices.

At the street’s southern tip under a Cold War block of flats, and under a nouveau-riche Philippe Stark block at the street’s northern end, lie forgotten foundations of two vanished entertainment palaces: the Apollo and the Friedrichstadt-Palast. Halfway between the two once stood the Wintergarten. Weimar Berlin was filled with many such theatres but these three houses alone had more than 12,000 seats between them, offering a full-time programme of variety shows, revue, circus and spectacle. This was pre-war Berlin at its best. All gone. Almost.

The old Friedrichstadt-Palast survived the Nazis and the war and, in 1984, moved across the road to a new auditorium with almost 2,000 seats and a 24 metre-wide stage. Though this new Friedrichstadt-Palast outlasted East Germany, it limped into the new century with tired, polyester extravanganzas for an ageing eastern German audience that knew no better. As that audience began to die off in recent years, the “Palast” faced a choice: try something drastic or join Berlin’s long list of dead revue theatres.

It decided for a radical overhaul and, in recent years, began hiring in star talent to spruce up its shows. The Palast’s creative directors realised that, to keep the lights on and make money, they would have to spend money. Serious money. After a few warm-up revues in the last years, the Palast has now struck gold.

“It’s been such a fabulous experience, I just love it,” said an ecstatic Mr Gaultier on opening night. “As a boy I dreamed of designing a revue and now it has finally happened.”

A decade after scaling back his fashion business in Paris, the 64 year-old’s path to the Palast began when he attended their previous show featuring costumes by fellow Frenchman Thierry Mugler. No shrinking violet, Gaultier asked the Palast’s directors flat out if he could do their next show. When the answer was yes, he set to work designing 500 costumes for 60 dancers as well as the lead cast.

With a huge hype, the €11 million show had already pre-sold €7 million in tickets by opening night.

When 2,000 people streamed into the massive auditorium, all were salivating at the prospect of the colour explosion that made Gaultier famous. But instead the evening begins on a poignant note: as the lights come up, we see a ghostly show palace ruin, onto which are projected black-and-white footage of delighted variety patrons in pre-war Berlin, unaware of the bombs that will soon follow.

And then the show explodes into life, with the ruined theatre now a location for a colourful underground rave-cum-fashion show. To thumping, catchy music by Daniel Behrens, a massive cast spreads out before the audience’s eyes like a Gaultier gourmet. Each a unique character, they are wearing outfits that run from drugged-up Disney villainesses to Village People tribute acts. Some outfits are playful nods to Gaultier’s own past – the infamous pointy Madonna brassiere is given a Lady Gaga makeover – while others often pointed winks at our politicised present, with men in belly-top burkas.

It keeps coming and coming, on such a dizzying scale that you have to remind yourself that they are not tricking you with mirrors. No, there really are that many people on-stage. At times it’s like Leigh Bowery, the late 1980s performance artist, has risen from the dead to stage the Stephen Sondheim musical Follies.

Just as your eyes adjust to the opulence, each scene is succeeded by another, including dizzyingly inventive scenes by Berlin-based Irish choreographer Marguerite Donlon. A veteran of Germany’s dance world, who most recently worked in Moscow’s Bolshoi, she embraced The One to get a taste of the “Palast” revolution from the inside.

“The creative director here, Berndt Schmidt, has been so incredible at putting a new face on the Friedrichstadt-Palast so I was intrigued to be a part of that,” she says.

“They brought together people of such expertise, all working at the top of their game,” says Donlon. “I feel privileged to have been part of such a stimulating experience.”

The premiere audience seemed to agree, with a final roar that almost lifted the roof off the auditorium. Some were cheering the show they had just seen, but others were also cheering the years of hard work that have gone into reviving the Friedrichstadt-Palast, securing its future.

This is more than just a revue: it’s a bow to a lost tradition, an exorcism of two dictatorships that stifled diversity and a steam-cleaning of the creative dust that had settled in recent decades.

Nowhere is the show’s multi-layered success more clear than the final show-stopper in which, before our eyes, Palast ballet director Alexandra Georgieva deconstructs that old revue staple: the kickline.

This is not your granny’s kickline. Instead, every time the audience wants to clap along with the 32 high-kicking women on stage, Georgieva pivots her dancers against each other and slows their movement. Again and again she drags the audience back and forward in time, building up the tension until a final, ecstatic release of applause. It’s a psychological, symmetrical masterpiece and Georgieva’s passport into dance heaven.

Anyone visiting Berlin soon should know that the German capital has a new attraction besides the Reichstag and Brandenburg Gate. Get a ticket – if you can – and get lost in the grandeur of The One.