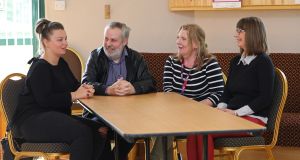 The 2016 census identified a non-Irish born population of over 17 per cent. However, in several small Irish towns the immigrant population is now much higher than this. Some 941 of the 2,383 inhabitants of Ballyhaunis in Mayo (almost 40 per cent) are non-Irish born.

Although the largest country of origin is Poland, the majority of newcomers are Muslims who arrived in the town in several waves since the 1980s. The first arrived to work in a meat processing plant. Some more recent arrivals have been refugees from Muslim countries.

Four other towns have non-Irish born populations of more than 30 per cent: Edgeworthstown and Ballymahon in Longford, Ballyjamesduff in Cavan and Monaghan Town. In each of these the largest group of newcomers is Polish.

A further five towns have populations that are more than 25 per cent non-Irish born: Saggart, Longford Town, Cahir, Gort and Cavan. In all of these except Gort the largest group are again Poles, reflecting the fact that the Poles are Ireland’s largest immigrant community

Very little research has been undertaken to date on the experiences of immigrants in rural communities and most of this is at least a decade old. Following EU Enlargement in 2004 a number of studies examined how some migrants who arrived to work in agri-businesses such as mushroom farms experienced grievous exploitation. There was little research on what happened to these people subsequently.

Dr Orla McGarry interviewed 33 Ballyhaunis Muslim teenagers in 2010 and 2011. Her findings depicted a community that was, to some extent, divided between long-established Pakistani and Syrian inhabitants and more recently-arrived asylum seekers from a range of countries.

Asylum seekers find themselves trying to integrate from a starting point of deliberately-imposed marginalisation. Those placed in direct provision have very little control over their lives and, until recently, none were permitted to work. Interviewees who arrived in Ballyhaunis as asylum seekers described feeling more alienated and excluded than other Muslims in the town.

Gort’s 2016 population of 2,951 included 785 non-Irish born of which 397 were Brazilians. However, before the last economic crisis the town’s Brazilian community was considerably larger.

The first arrivals were recruited by meat processing plants similar to ones in which they had worked in at home. They helped reverse generations of population decline and injected, according to several newspaper articles, a new vibrancy into the social life of the town.

Some segregation existed between Brazilians and other Gort residents insofar as many of the former were members of Pentecostal churches. While it is clear that the newcomers were welcomed by schools and community organisations, as well as by employers, it also seems that some became marginalised because they could not speak English.

A recently-published study by the ESRI of the residential distribution of immigrants identified Monaghan Town, Ballyhaunis, Ballyjamesduff, Roscommon Town and Bandon in Cork within the 10 electoral areas with the highest proportion of people with poor English-language proficiency. In each of these communities more than 10 per cent of the total population currently have poor English.

Clearly there is a need to target support towards such communities. Linguistic barriers impede integration by making it harder to obtain employment and to have meaningful access to rights and entitlements. Generally, those who cannot speak English tend to be more vulnerable to exploitation because they depend on intermediaries.

Over the past two decades, immigration has been as much a rural phenomenon as an urban one, and it is important that community development policies reflect this. Much of the work done to promote integration has come from schools, voluntary associations, and sporting bodies like the GAA.

Immigrant-led groups have also done much, for example through annual Polski Eire festivals, to promote social cohesion. Yet communities with significant numbers of asylum seekers and migrants who do not speak English would benefit from increased support.

Bryan Fanning is Professor of Migration and Social Policy at UCD