The town is among the most multicultural in Ireland, with 35% of residents born abroad 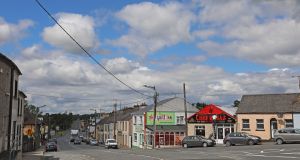 Edgeworthstown, home town of the 18th/19th-century writer Maria Edgeworth and her family, is now one of the most multicultural towns in Ireland. Almost 35 per cent of its 3,000 or so residents were born abroad.

It has consequently become one of the fastest growing towns in Ireland. This growth could be seen as surprising. In the aftermath of the economic crash it was blighted by half-occupied estates that had been incentivised by section 23 grants.

Auctioneer Frank Greene drives me around in his jeep to show me that 99 per cent of those houses are now occupied. He shows me the factories at the edge of the town – C&D Foods, Paul and Vincent, Moulding Technology LTD. He talks about the post-boom doldrums of absentee landlords and vacant properties.

“The new communities saved this town,” he says.

Greene is also the chairman of the Edgeworthstown District Development Association. Some people here, he says, are locked into what the town used to be, before the mart left, before the town was bypassed.

“But towns change. People change. What worked for your father won’t necessarily work for you. What works for you won’t work for our children.”

The Edgeworthstown District Development Association is optimistic about the future of the town. Greene introduces me to Claire McEnroe, “a-blow-in from Cavan”, who is on a committee overseeing the transformation of the former Ulster Bank building, recently bought by the council, into an Enterprise Hub for local start-ups and telecommuters.

“We want to keep people here,” she says. “To future proof the town.”

“Market towns are not going to be about retail anymore,” says Greene. “We have boohoo.com now. People buy online. What we have to provide is services like this.”

There are other reasons for optimism. A new library will soon be built on Main Street at a cost of €3 million (the sod was turned by Minister for Rural and Community Development Michael Ring last week), and Greene would love to see the development of an industrial park. He takes me to the local crèche which is situated next to a community centre and a national school, where 19 different nationalities are represented in the playground.

He shows me the old Edgeworth family’s dower house and the nearby walled gardens. His own offices are situated in the Edgeworths’ old porter house. Does he like owning a bit of the town’s history?

“Sure, aren’t we making it every day?”

How did this town’s population become so diverse? The way Greene and others describe it, it was an organic process. Lots of people came to work in the factories at a time when it was difficult to find workers. Then, when the property market crashed, those workers bought cheap houses and put down roots.

Muhammed Khan, whom I meet in his phone shop catering to the phone-cover needs of a gaggle of teenagers, says he came here at the suggestion of a friend, for a quiet life.

“In Cork and Limerick [where he previously lived] life is very busy. You can’t give time to the people. Here, everyone is going to finish work after five or six and mostly everyone knows each other.”

I visit an English-language conversation class run by Longford Community Resources, a local development company. The atmosphere is warm and friendly. Eva Halasz from Slovakia has brought some Slovakian chocolate cake in a Tupperware container.

“We love her because she brings treats,” says Brendan Fagan, a retired IT worker who helps out here as an English tutor.

The conversation class was established in part to help people connect into the community. A community worker named Mary Mulvey contacted the factories and went door to door telling people about it.

“That’s how I found out,” says Magdalena Termakovs from Poland.

“In our job there are Slovakian, Polish, Latvian people but no Irish. I got the Russian language in my time in Edgworthstown, but no English.”

Halasz is soon to start working at the new Center Parcs holiday village nearby. “I started in Supervalu. My English was ‘thank you’ and ‘bye’ and she gave me a chance and I was very happy. I grew here and Edgeworthstown grows and I am happy.”

Both Termakovs and Halasz came to Edgeworthstown via loose informal networks of family and friends but it can be difficult for newcomers to the town who have no such supports. At one point, a young Nigerian woman breaks down when talking about how lonely she is. She is quickly comforted by the others.

“She’s very far from her country,” says Halasz. “She has young babies. I know this feeling. It is very, very hard.”

“The discussion can veer into issues about being a woman living in a small town,” says Joan McNamara, another of the local tutors.

“People will be working in a factory which can be isolating because they’re not speaking English and the work is very physically demanding and you have to do the lunches and the schools . . . and then Saturday comes and you Skype your mother or sister back home.”

Brendan Fagan has some understanding of the difficulties faced by the new communities. His spouse James is from the Philippines (“I thought I was the only gay in the village. But I’m not!”) and James also works in Epicom where he has learned Slovakian, Latvian and even sign language.

Language is a complex issue. Christeline de Wit, an entrepreneur from South Africa, says she thinks newcomers should speak English in the home but Termakovs disagrees. “I want to teach my children the Polish language so they can speak with family back home.”

Termakovs says she and her family are here to stay. Not everyone stays. Halasz thinks she and her husband might return to Slovakia to retire. He has very little English, she says.

“Everyone knows him. He is a perfect worker but he doesn’t speak. He is very shy.”

In contrast, Termakov’s more outgoing mother has no English and persists in talking Polish to strangers nonetheless. “I say, ‘But they don’t understand you’ and she says, ‘That’s fine I don’t understand them as well.’”

Not everyone is so upbeat. In the Dolphin restaurant I tell the restaurateur Nellie Nolan that I’m writing a piece for a series on small Irish towns and she says: “This is a small Irish town doing absolutely F-all. There’s nothing in it now. . . The bank closed. The credit union closed . . . I used to work in the Park House Hotel above on the hill; that’s closed.”

Mary Kane, who owns the local garage, says the bypass killed traffic through the town and that they need a secondary school “to draw people in again” but she does note that the town has a great community and is a great place to raise kids.

For the most part the same complaints recur: the lack of a bank or ATM, inadequate broadband in the hinterlands, the lack of a secondary school (“We’re bussing 500 kids to other towns,” says shopkeeper John Farrell), the lack of a Garda station and issues with anti-social behaviour and public drinking.

“You get these problems across the board in rural towns,” says Valerie McFarlane from Longford Community Resources about the latter issue.

“It happens in every country,” says Termakovs. “Sometimes those people just need help.”

“A good kick up the arse is what they need,” says Fagan and they laugh.

This narrative is usually balanced by positivity. People mention the GAA, the Mostrim Players drama group, the creche, the community centre, the railway station, the Maria Edgeworth Literary Festival, the Heritage Trail, the tidy towns committee and a local knitting circle.

Only a couple of people I meet have anything bad to say about the multicultural make-up of the town. Those with children note that kids of all backgrounds play together at the national school and crèche.

The people who have issues with the new communities are a bit older. One woman says she doesn’t know everyone on the street anymore. A publican complains that the new communities don’t use the pubs, though she softens a little when considering the hurling team.

Maqbool Ahmed came to Ireland from Pakistan in 2001. When he first worked on a building site in Longford, he and the other Pakistani workers had stones thrown at them. A few weeks later they found themselves working alongside the stone throwers. “And we were friends then,” he says.

He has experienced less racism in recent years. He was involved in a recent joint celebration of St Patrick’s Day and Eid in Longford and is very involved in a nearby community garden.

The reality is, he says, that the people of Edgeworthstown, Irish-born or not, are very busy with their families and jobs. So why is he so involved in the community?

He smiles. “Because this is the place where I live.”