Why we should save Cork's Vernon Mount 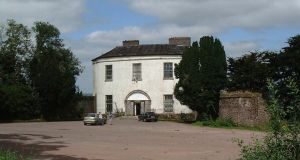 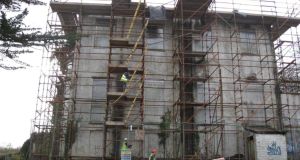 Why is it of interest?
Vernon Mount is a late 18th century villa south of Cork city with panoramic views of the estuary of the River Lee. Its original owner, Atwell Hayes was a successful merchant in Cork City. The house was named after Mount Vernon, the home of president George Washington on the Potomac River. Its two-storey curved front is unusual and complimented by bows on either side.

Interior features include an elegant cantilevered staircase with a neo-classical wrought-iron balustrade, a fine oval first-floor landing with marble Corinthian columns. The decorative plasterwork, ceiling and wall paintings by Cork artist Nathaniel Grogan are particularly noteworthy. It remained as a family home until it was purchased by the Cork and Munster Motorcycle Club who built a motor-cross race track on the parkland.

In 1997, it was bought by developers led by San Diego based IT entrepreneur Jonathon Moss who were refused planning permission to redevelop the house and build houses/apartments on the site. Moss remains the principal owner of the house and the motorcycle club lease the grounds for their use.


What state of dereliction is it in?
Its fine front door with a large semicircular fanlight was badly damaged by burglars several years ago. Its windows were smashed and are now boarded up. There is likely to be extensive water damage and wet rot throughout the house and the Grogan paintings in the first floor oval hall are at particular risk.


What repairs have been carried out? Extensive roof repairs were carried out by Cork County Council with grant aid from the Department of Arts, Heritage and the Gaeltacht in 2012. This involved replacement of 60 per cent of the roof and repair of the remaining 40 per cent.

Who is championing its cause?
The Irish Georgian Society drew the dereliction of Vernon Mount to the attention of the World Monument Fund who placed it on their list of 100 Most Endangered Sites in 2008. A local voluntary group, the Grange Frankfield Partnership was formed in 2010 to campaign for the conservation and restoration of Vernon Mount.


What happens next?
Vernon Mount is in the middle of an area currently being developed as parkland to link to a larger park with a foot bridge across Cork’s South ring road. The master plan for Tramore Valley Park suggests Vernon Mount could be a hotel, conference centre or corporate headquarters.

Ger Lehane from the Grange Frankfield Partnership says that there is “an impasse” between the owner and the county council following planning permission refusal.

“Our call is for an immediate resolution to the ongoing impasse between the council and the owner of the property, enabling essential conservation works to take place, before its rich heritage is lost for all time,” says Lehane.

“The alternative is that the council exercises its powers as provided in the Planning & Development Act 2000, in the absence of any meaningful engagement by the owner. We must continue to highlight that time is of the essence in saving the house from ultimate ruin.”

Nicholas Mansergh, senior planner with Cork County Council who authorised the roof repairs to Vernon Mount, adds “more favourable conditions for reuse of Vernon Mount may arise when the Tramore Valley Park is complete. The main part of this park is being created by the City Council, and the County Council proposes to extend it south along the valley east of Vernon Mount.”

Marsergh says that almost all the land needed for the park is owned, taken in charge or being acquired by one or other of the councils. “If, in the longer term, Vernon Mount could be integrated into the park or have good connections into it, this would improve prospects for its reuse for a leisure or cultural use. The museum and café in Fitzgerald’s Park is a good example of this in Cork. Alternatively, there have been cases where important heritage buildings in poor condition have been bought and restored by private owners. One recent example in the same area is Monkstown Castle, which was restored privately in 2008.”


Chartered building surveyor Frank Keohane will give a talk on the Irish Georgian Society’s ambition to compile a National Buildings At Risk register at 6.30pm on Tuesday next, April 29th, in the City Assembly House, South William St, Dublin 2. See igs.ie for details.


If you know of an important building that has fallen into disrepair email buildingsatrisk@irishtimes.com