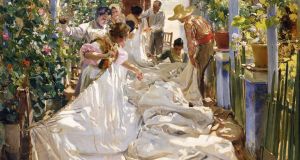 Visitors to the National Gallery of Ireland can discover one of Spain’s most popular artists when its latest exhibition Sorolla: Spanish Master of Light opens on August 10th.

Commenting on the exhibition, which took two years to curate, Dr Brendan Rooney, head curator of the National Gallery said: “We do not have any of Sorolla’s work in our collection, so this exhibition represents a chance not only to appreciate this Spanish master’s virtuoso skill, but to escape into the light and warmth of Spain.”

Known as Spain’s impressionist, the title “master of light” was bestowed on him by French impressionist Claude Monet, for his iridescent canvases. Sorolla’s skill at capturing the intense Mediterranean light is remarkable, as French critic Henri Rochefort acknowledged: “I do not know any brush that contains as much sun.”

He drew his inspiration from the dazzling light on water and his beach scenes are marked by sharp contrasts of light and shade and vigorous brushstrokes. From vivid seascapes with children bathing - for which he is most renowned - to portraits, landscapes and genre scenes of Spanish life, the exhibition features 52 works spanning Sorolla’s career and has just finished showing at the National Gallery in London.

In the spring of 1908, the Grafton Gallery in London made an audacious claim for its new exhibition, boasting that it was showing “the world’s greatest living painter”: the Spanish artist Joaquín Sorolla.

This was at a time when Picasso was in his African period, in the midst of painting his Les Demoiselles d’Avignon and Claude Monet was busy developing his water lily series.

A century later, when Sorolla’s exhibition toured Spain, it became the most popular exhibition in Spanish history.

Sorolla was a child prodigy. Orphaned along with his sister at two, as both his parents died from cholera, he was raised by an aunt and uncle who recognised his talent, and found him work as a lighting assistant to a local photographer at a very early age.

Many of his paintings are lit and composed like snapshots, especially those of his wife and muse Clotilde. His devotion to her is captured in his writing: “you are my body, my life and my mind, you filled every void of my life as a man without the affections of a father and mother before I met you, you are my perpetual ideal”.

It was not money that drove the artist, as he made more than enough, nor was it pride. Painting, for Sorolla, was a compulsion. “For him, the practice of art was a vital function, like breathing,” said the writer Ramon Perez de Ayala, who sat for a portrait in 1908.

One of the most striking paintings at the exhibition, along with the Sewing the Sail and Mother, both of which show his dazzling skill using the colour white, is Sad Inheritance, which depicts naked boys playing on the beach, and of which Sorolla said was “my nightmare and my fear. . . it was so beautiful and so sad”.

The painting portrays a friar with young boys, some of whom are on crutches, from the orphanage Hospital of San Juan de Dios, which he describes as “the saddest detritus of society: blind, mad, handicapped or leprous”.

“I painted it with my soul, but as it is very personal, I fear it will not be understood”.

His fear was unfounded and following its peerless critical success at the Paris exhibition in 1901, the painting took the highest award at the National Exhibition of Fine Arts in Madrid, establishing his career. But is said to be the painting that touched the artist most deeply.

The exhibition runs until November 3rd, and entry is €15/€10/€5. In conjunction, the gallery is running a series of workshops, talks, a dementia-inclusive tour and a flamenco evening to celebrate the Spanish Master of Light. See nationalgallery.ie.