Where to stay, rent and buy on the Beara Peninsula

At home for the holidays 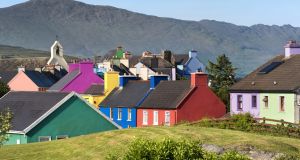 West Cork really stands up to scrutiny. It has spectacular scenery and the food and drink offer is first class – with many household grocery names having started life as cottage industries here. The English, Germans, Dutch and French who fell in love with its wildness in the 1960s and 1970s helped to form its cosmopolitan personality.

But in high season of August it is almost a victim of its own success. Much of the south of the county – Union Hall, Skibbereen, Scull and Baltimore – can feel like you haven’t gotten away at all, rather everyone from has joined you on holidays. That can be wonderfully social but if, like Greta Garbo, you want to be alone, then point your compass northwest and head out to the Beara Peninsula.

Shared by counties Kerry and Cork, this finger of bog poking out into the Atlantic has managed to maintain an off-the-beaten track sensibility. Littered with archaeological sites it is especially popular with hill walkers.

It is also steeped in mythology. Beara is where the Children of Lir came ashore after 900 years faoi geasa, their spell finally broken by the tolling of a bell heralding the arrival of Christianity in Ireland. They are reputed to have died at the village of Allihies, a drive of 12 clicks from Castletownbere, less, just eight or nine miles, if you walk across the mountains.

The scenery is beautifully framed in the TV adaptation of Deirdre Purcell’s novel Fallen For a Dancer, which was filmed here in the late 1990s. For Susan Byron of Ireland’s Hidden Gems it remains one of the country’s best-kept secrets.

At the tip of the peninsula you can take a cable car out to Dursey Island and get a real bird’s eye view of the topography of the mainland. On its most western hill stands the signal tower, built as a line of defence against the French 200 years ago, and on a clear day you can see north to the Skelligs and south to the Mizen. A one-bedroom cottage where you sleep under the eaves is perfect for romantics and costs from €29 per night per person sharing through Air BnB. A stone-cut cottage that sleeps five and has a viewing terrace costs €54 pps.

Berehaven Lodge, just outside Castletownbere, has 16 self-catering chalets, 15 of which sleep six each and cost €850 to rent per week during high season. The location is popular for weddings and large family get-togethers. The 16th chalet is considered the honeymoon suite and just sleeps two.

Bere Island, a mile offshore and accessed by ferry from Castletownbere, is a wonderful place to lay your hat. About 11km by five and with a population of about 200 you can take walking tours or kayak or dingy lessons. Barry Hanley has three self-catering houses, two sleep nine and one sleeps eight. These range from €600 to €700 per week on a self-catering basis. The Hanley’s also produce their own wildflower honey and have their own small flock of Welsh rare breed Kerryhill sheep. You can, depending on the time of year, help out with lambing or try your hand at shearing the sheep or help harvest honey in a bee suit.

Set above Adrigole Harbour is a two-storey traditional farmhouse that has beautiful sea views to the front. Uninhabited for the last 15 years, the property needs complete modernisation. On an acre of land and including stone outhouses it is asking €175,000, its price recently reduced by €40,000, through agents Harrington Estates.

In contrast, the old national school, at Kilmacowen, Eyeries, which dates back to 1870, has been sympathetically restored by its surveyor owners, Elizabeth and Piers McCausland and has an open-plan kitchen livingroom and three bedrooms. In walk-in condition it is asking €255,000 through the same agent.

Adrigole House is a sprawling four-bedroom, two-bathroom Georgian house of 2,600sq ft with access to the salt water part of the Adrigole River from its lands across the road from the house. It asking €475,000 through agents Hordnett Forde also selling Mill Cove House and Gallery in Castletownbere. It includes a detached property with water frontage and a gallery space set in converted outhouses and is asking €790,000.

Less than a mile from the village of Eyeries is a two-bedroom, two bathroom, stone-fronted cottage with gorgeous sea views. Facing almost due west you can watch the sun sink below the horizon. It is asking €255,000 through agent JJ O’Sullivan who is also selling a one-bedroom detached house with sea and lake views and a studio, barn and garage located about four miles from Eyeries at Derryvegal. On about 1.5 acres it has been for sale for about 15 months and is asking €300,000.

Where to eat, have a coffee, ice cream etc

Glengarrif is gorgeous so before you steal yourself for the last leg of the journey stop off in MacCarthy’s, a traditional-style bar, adjoining a hotel and sate the family with delicious pub grub. The house special is a steaming crock of tender Bantry Bay mussels served in a white wine sauce.

On the southern side of the peninsula, about six miles east of the fishing port of Castletownbere is Berehaven Lodge restaurant. Serving breakfast, lunch and dinner the eatery has an outdoor terrace overlooking the sea where on Sunday nights South African chef Mark Funston does open fire or braai cooking. Last weekend he cooked the first of this season’s blue fin tuna caught at the port and also cooks whole lobster and chickens on the grill.

You can stock up on supplies of local produce at food and wine shop Taste in Castletownbere and for a sugar fix afterwards pop into a favourite of John and Sally McKenna’s Guide, Issie’s Handmade Chocolate and Ice Cream Parlour.

Mileens was the very first of the Irish farmhouse cheeses with its first round made by husband and wife team Veronica and Norman Steele, who set up the business in 1976. Veronica sadly passed away last year but their son, Quinlan Steele, is now running the creamery where you can buy a round for €2.50, from the factory, situated a mile outside the village of Eyeries, on the other side of the peninsula.

And on the days when the rain closes in and you are relegated indoors head east to explore Bantry House. Why? “There are not many homes that can claim to be have been furnished by a fire sale at Versailles,” says Susan Byron. If you fancy lunch see if food truck Wokabout is in town for a tantalising taste of Thai and Vietnamese street food. Or head to Organico for a slice of parsnip cake served alongside one of its 25 varieties of tea.

The gallery to look at

The Sarah Walker Gallery may be the most beautifully sited art space in the land. Set within the whitewashed stone walls of a former carriage house on the pier at Castletownbere, painter Margaret Corcoran will be showing her work there during the Beara Arts Festival August 4th-11th. It is also a lively venue for music with live gigs, theatre and poetry readings under the title The High Tide Club.

One of the highlights of the Beara Way walking route is the Uragh Stone Circle, which is in Co Kerry, not Cork, says Byron. The lichen-covered rocks, the tallest of which stands 10ft high, are set between two lakes, Lough Inchiquin and Lough Napeasta. “While off the beaten track it is relatively accessible by road. Devoid of interpretative centres it is pretty tourist free too,” she says. Surrounded by a natural amphitheatre the circle itself isn’t huge, about 2.4 metres in diameter, but it is the location, as if the tallest stone were a parent to all the other little stones, that resonates.

Afterwards go to Helen’s Bar, aka Teddy O’Sullivan’s, overlooking Killmacilogue Harbour, on the Kerry side of the countryside, for fresh salmon sandwiches or organic mussels fresh from the beds in the bay. You can also stay above the traditional bar. Bearatourism.com

“Even if you miss the soup, sandwiches and mussels served in MacCarthy’s bar (up to 5pm only), a pint and a packet of Tayto is an essential part of any visit. You can dine out on the authentic experience for years after and can cite the book McCarthy’s Bar by English writer Pete McCarthy which is still luring in tourists for its colourful evocation of local life, as illustrated in an entire chapter in the book called ‘All-Night Hooley in MacCarthy’s Bar’,” says Mary O’Brien of Explore West Cork, a free monthly news sheet.

For local crafts head to The Great & Co, also a cafe serving Badger & Dodo coffee and breakfast all day long.

Olfactory fanatics should take home one of Joan Woods marvellously summery sweet basil and bergamot, an organic fragrance from Union Hall-based Waters and Wild and available to buy in Organico, Bantry. Travel-size candles start from €25 and handbag sized roll-on perfume from €35. Situated further south in Union Hall you could, on the way home, take a diversion and stay at the perfumery’s converted Long Barn, a stone building on the premises available to rent through AirB&B, that costs €54 per person per night. Residents can, subject to availability, take a tour of the fragranced gardens where many of the ingredients used are grown.