‘There is nowhere for older people trading down to go’ 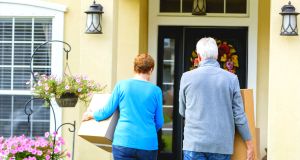 A latent log jam is emerging however, mainly due to the lack of options for older homeowners looking to trade down. Photograph: iStock

The new homes market will be well served this autumn, with plenty of options coming on stream, most of which will be aimed at first time buyers.

“There are lots of second and third phases launching, as well as a few new schemes, priced between the €300,000 and €500,000 mark where there is real heat,” said David Browne, new homes director at Savills.

Many buyers are now availing of the Government’s Help to Buy scheme, where the primary appetite is for three- and four-bed homes, although demand is good across the board. “Everything is moving along, nothing is sticking,” Browne days.

A latent log jam is emerging however, mainly due to the lack of options for older homeowners looking to trade down. “We don’t have enough suburban apartments priced between €350,000 and €450,000.

It means anyone waiting for a development to come on the market is disappointed but older people in particular don’t want to rent, it’s alien to them

There is nowhere for older people trading down to go, particularly as they don’t want apartments in an older converted building, they want new, easy to heat and modern.”

The recent rise in the private rental sector – characterised by institutional investors buying multiple apartment units and, increasingly, entire blocks before they are built, is adding further pressure to this sector.

“It means anyone waiting for a development to come on the market is disappointed but older people in particular don’t want to rent, it’s alien to them,” says Browne.

It is a trend that will have a knock-on impact on first-time buyers too, many of whom traditionally saw the purchase of an apartment as a stepping stone to a house.

Savills is handling a number of schemes due for launch this autumn, including three and four bed homes in phase two of Bellingsfield in Naas, where prices start at €345,000. Somerton in Lucan, a phase four development, starts at the same price. For apartment hunters, Willow Glen, on Glenamuck Road, Kilternan, has prices starting at €280,000.

People are at the limit of their affordability across the market. They can’t afford to pay more

Selling agent DNG has 17 active sites on the go and four new ones launching. “We’re seeing good interest levels and it looks like a lot more development is coming on stream,” says Paul Murgatroyd, director of research.

New developments include Rockville at Glenamuck Road, Westminster Wood in Foxrock, and Carraig Buí in Cabinteely, which includes 28 apartments.

Murgatroyd adds that any fears that the Help to Buy scheme would inflate prices have not come to pass. DNG analysis of a number of developments over the past 12 to 18 months has found price increases for new builds were lower on average than those for second hand homes in an equivalent area.

“That said, affordability is still an issue and builders are cognisant of it. People are at the limit of their affordability across the market. They can’t afford to pay more,” says Murgatroyd.

He sees the growth of the private rented sector (PRS), which has seen around a dozen apartment block purchases this year already, as positive. “It will bring rental stock into the market and that’s what we need. We need as many rentals as we need houses.”

Among the launches Hooke & MacDonald is handling this autumn is Cedarview, a second phase Cosgrave-built scheme in Santry just off Northwood. Four beds will start from €465,000, says David Lawlor.

He agrees that the market is frustrating for downtraders. “There is a marked increase in older people looking to trade down in suburban locations like Dun Laoghaire and Rathgar. They are increasingly coming around to the idea and are looking for two- and three-bed apartments to buy but won’t go outside their location to get them because it means leaving their friends and clubs.”

If the developers build however, they will come, Lawlor reckons. “At Eustace Court in Dun Laoghaire last year (a mix of two- and three-bed apartments) I had a dozen older people move in. Same with Bracken Park in Castleknock six years ago, we sold at least 15 or 16 to older people.”

The development of a PRS here, similar to that in other countries, should help, even if older people don’t want to rent.

Best known is Kennedy Wilson, which entered the market during the recession and is now reckoned to be very much in acquisition mode, including in Cork.

Also active is German group Patrizia, which has long experience in the long term rental market there. Global property investment group Round Hill Capital is reported to have €1 billion to spend. Local players are getting involved too, such as Irish Life, which bought Fernbank in Churchtown outright for an estimated €100million, where 261 apartments are under construction.

These players are displacing Ireland’s traditional network of small time landlords, typically funding pensions. On the plus side, they bring a much needed professionalism to the rental sector, with schemes that can include amenities such as gyms and work hubs. But more than anything, they bring capital – and this should help both those who want to rent apartments and those who want to buy.

“People knock the PRS but they are a very positive addition to the market,” says Lawlor. “In buying one block of apartments, they provide builders with the funds to go off and develop two more.”