The BER necessities for house-hunters

A building energy rating certificate is compulsory for all homes offered for sale in Ireland, but does a good rating make a whit of difference to buyers? 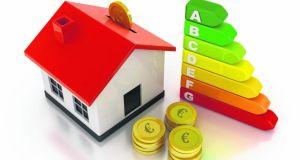 Since January this year, all advertisements for homes for sale, or indeed rent, have been required to display the rating. With ratings from A1 to G indicating the energy performance of a home, house-hunters know exactly what they’re buying into. So if the attic is drafty, the windows are single-glazed or the hot water tank is without a jacket, a buyer doesn’t have to wait until moving in to find out.

The building energy rating, or BER, is the calculated energy use for room and water heating, ventilation and lighting based on standard occupancy. Similar to the energy label for household appliances such as your fridge, A-rated homes are the most energy efficient and tend to bring the lowest energy bills. But are buyers bothered?

Chartered building surveyor and BER assessor Kevin Hollingsworth says the rating is all about giving buyers, and renters, more power. “If a buyer visits two houses on the same street that look exactly the same and one has a C1 rating and the other has an E rating, it prompts the consumer to ask ‘why’,” he says.

“The C1-rated house may have new double-glazed windows or a new condensing boiler, so the consumer knows that could save them €300-€400 a year on energy bills. On an E-rated property, the boiler might be gone in two years.”

In fact, inefficient boilers are the biggest culprits when it comes to dragging down ratings. Hollingsworth says BER ratings are all about “using” and “losing”.

Buyer awareness
But no matter how poorly a home performs, none can be deemed unsaleable because of a low rating.

“There’s no ‘fail’ or no ‘pass’. It isn’t about saying you can’t sell this house because it’s totally inefficient. It’s about giving knowledge to the consumer.”

Whether the rating makes a difference to the purchaser or not depends on the house, says chief executive of Douglas Newman Good, Keith Lowe.

“I don’t think it’s a factor unless you are buying a new home,” says Lowe. “The difference could make a person decide between one new home scheme and another.”

But with so few new homes being built in Ireland since the rules were brought in, the point is moot. But BER ratings don’t seem to be concerning buyers of second-hand homes either.

“Most old houses and all period houses would be close to G-rating. Does it make a difference to the price we get? No it doesn’t,” says Lowe.

But buyer awareness of the energy ratings is on the up. With estate agents and property websites required to include the rating on all property advertisements, whether in brochures, online or in their office windows, the information is staring buyers in the face.

“Buyers are asking more about it now than they used to and I don’t think that’s a bad thing,” says Lowe. “But at the moment, because there is very little new construction, there are very few high-rated homes. Maybe in time, when they are building 15,000 to 20,000 houses a year instead of 5,000, it will make more of a difference.”

Chief executive of the Institute of Professional Auctioneers and Valuers, Pat Davitt, agrees that with so few high-rated homes in Ireland, there’s no real ratings competition in the market.

“The amount of houses in the country that are A-rated, I think you could nearly count them on your two hands. To get a rating that’s going to make an awful lot of difference is not possible.”

Figures from the Sustainable Energy Authority of Ireland (SEAI) back up his view. They show that of homes certified to April this year, just five out of 361,758 achieved the top A1 rating. The category with most homes, at 48,000, was D1.

Davitt says even if buyers are aware of BER ratings, they don’t really know what they mean. “Most auctioneers I talk to say people never even look at the cert. The only person who looks at it is the solicitor because he needs it to close the sale,” says Davitt.

He says while some renters may try to use a low BER rating to bargain down rent, their understanding of what the rating actually means is often poor.

“It’s very difficult to say in monetary terms what it would mean to your bills to have a C1 rating versus and D2 rating. In money terms, it could mean very little.”

Energy conscious
Where the difference in rating between two homes is slight, purchasers don’t seem to fret, says Keith Lowe. “Does it make a difference if two houses are next door to each other and one is a C and the other is a D? No it doesn’t.

“A buyer can upgrade very quickly from a C to a D by using lagging jackets or doing other things, so I don’t think it’s making a huge difference.”

Insulating the hot water cylinder and pipework, replacing an old boiler, increasing insulation of the walls, attic and floor, energy-efficient glazing and installing modern heating controls can all make a big difference to energy bills.

Hollingsworth estimates that just one in 10 buyers is particularly energy conscious and for them, a good BER may be a deal breaker. “But in my experience, people tend to buy homes because of the area, the schools and the facilities.”

But the SEAI is realistic that the BER rating is unlikely to ever become a deal-breaker. “You can’t displace a person’s ability to afford a property or where they wish to live with an energy rating,” says the SEAI’s head of information, Tom Halpin.

“But if a person decides they are going to buy in a specific area and they fix on a price range, it’s then that the house condition and its energy performance can actually become quite a critical factor.

“We wouldn’t expect that energy is the primary consideration for a person buying a house. But if there are two properties that are ostensibly the same, the one with the higher BER rating will sell before the other.”