Professional house hunter Breffnie O'Kelly finds homes for people relocating to Dublin. When it came to renovating a home for herself and her daughter, she called on an architect friend to help maximise every centimetre of space 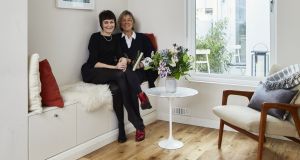 When Breffnie O’Kelly first saw this two-bedroom house in Dublin she knew it quite well and expected that she would probably buy it. “My approach to all houses is that by the time you walk in the door, you should know you want it and the house should work hard to put you off,” says O’Kelly, who works as a buyer’s agent, finding properties for time-poor people or those living abroad who plan to return to Ireland.

When she wanted to find a new home for herself and her teenage daughter, she followed the advice she gives to others and did a drive-by viewing having already checked out the location – and she says that it is not just about the neighbourhood or even the street, but what end of the street, because some parts may be quiet while others are full of traffic.

“I knew the house would work for me, and my daughter. The size and orientation were right,” the school was close by and there was a place nearby where she could take her morning walk.

“When buying, the house itself is at the top of the pyramid. The bottom bit is money, the next is location, then the specific location. There are so many things you can tell without ever being in the house,” says O’Kelly, who says a lot of people exhaust themselves driving around to viewings at the weekend, and a particularly futile exercise is looking at homes near the top of your budget, she says, because people are constantly outbid.

Yet having done her homework, “this house did work hard to put me off. It was very dreary. There was a really dark kitchen with a huge amount of counter space; all walls and counter. And not a nice downstairs shower room,” says O’Kelly.

Yet she did spot a neighbour’s plants all over the pavement. “They were crazy; exuberant and I thought, yup, I like that enthusiasm. At least one neighbour is a kindred spirit.”

The seasoned property hunter and former estate agent, who worked at DNG, could see past the drabness. And she also had another asset – her friend, architect Eva Byrne, who runs the design advice company Houseology.

“I had no fears. Eva has a magic feeling for things.” Within minutes of Byrne visiting the building, the pair of them were in a cafe. “We went for coffee and she was drawing it up. Straight away we had options – where the kitchen and bathroom would fit – and within an hour and a half, we knew where the furniture would fit too. Pretty well it was done. It was so exciting and reassuring.”

The first job was to put back sash windows and then they tackled the layout. The front door opened into the living room with the stairs running up beside them, beyond was a shower facing the courtyard with a corridor behind it which led into a kitchen extension.

“The shower room was occupying a prime location,” says Byrne, “and it was pretty nasty having to walk by it to the glum kitchen in the extension. By scraping it away, all the social spaces could enjoy the courtyard.”

The bathroom was moved behind a new wall at the back of the kitchen. This left the kitchen, dining space (where the shower and corridor used to be) and living room (with a new larger window) wrapping around the courtyard.

“The courtyard is tiny but because we made more openings onto it, it is like a lantern: it’s infused the house with light,” says Byrne.

Byrne created more space in the now smaller kitchen by raising the countertop higher than is standard. By putting it at 100cm she got 10cm drawers beneath it. “Who says a kitchen counter has to be 90cm high?” says Byrne.

The two bedrooms upstairs were “charming”, with high ceilings and coving, and both O’Kelly and Byrne decided the biggest room would go to the teenager.

“With a young teen sharing the house, I was conscious of meeting the needs of them both. A lot was informed by that,” says Byrne. “A bigger bedroom made sense because teenagers can spend a lot of time there.”

Both O’Kelly and Byrne were conscious of allowing for different social spaces. “The key thing I said to Eva was that I definitely wanted two different living spaces, even though it is a small house,” says O’Kelly. Hence the dining and sitting areas.

“In a house like this, every single centimetre counts, and you have to spend those centimetres wisely,” says Byrne. “We got a lot out of it.”

So she was surprised, when after having designed a kitchen, utility and bathroom that all fitted in the former kitchen, O’Kelly wondered if she could have a bath in there. This, after all, was a collaborative process and one that was fitting things in well.

“I thought, for God’s sake, not a bath,” Byrne laughs. But she takes huge pleasure in providing what people want and creating solutions. “She got her bath – a 1.35cm one at that – and it works.”

The meaning of home

Moving into a new home has different meanings depending on where people are in their lives, says buyer’s agent Breffnie O’Kelly. While a young couple buying their first home will have a strong energy and their eyes on the future, “sometimes, when you are moving out of a relationship and are just exhausted, home becomes a basic shelter. It doesn’t have a pact with the future. The energy behind it is it being a safe place,” says O’Kelly who moved into her new home after her marriage ended. “The very essence of what a home provides – shelter and safety – are much more to the fore when moving from a relationship.”