Window on the world of shopfronts

“Shops are part of our culture,” says photographer Paul Tierney who has captured their expressive windows for an exhibition at the Irish Architectural Archive 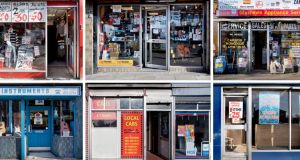 A selection of the shopfronts from Dublin Shops: Photographs by Paul Tierney

‘He passed, dallying, the windows of Brown Thomas, silk mercers. Cascades of ribbons. Flimsy China silks,” wrote James Joyce in Ulysses and it is shops with their expressive windows that have captivated, and been captured by, photographer Paul Tierney for an exhibition at the Irish Architectural Archive.

“Shops are a part of our culture,” he says, in the knowledge that they are not considered in the same light as higher culture such as art.

His depictions of Dublin’s functional specialist shopfronts that persevere in our midst range from a model shop with boxes piled in the window, to a Bernina Electronic Sewing Machine Centre, with sewing patterns plastered on the glass and examples of hand-knits draped over machinery.

The crowded windows with haphazard signs and aluminium frames are not beautiful in the manner of Edwardian and Victorian shops, with their carefully scripted signs, shelving and multiple panes of glass (large plates of glass were technically challenging in the past).

“You can have quite banal objects that look really good photographed,“ says Tierney, who was influenced by the work of photographers Bernd and Hilla Becher who recorded industrial structures, starting with the documentation of the disappearing industrial architecture in the Ruhr valley in Germany.

It was farm buildings that captivated the US photographer Walker Evans who recorded the effects of the Great Depression in the 1930s for the Farm Security Administration, set up to combat rural poverty. His depictions, in pictures, are thought to have inspired another great work expressing the Depression: John Steinbeck’s Grapes of Wrath (although Steinbeck had worked on farms in his youth).

“They were influential in art photography,” says Tierney of this “objective” work. “It is where art covers documentary.”


Huge changes
And the documentation here, of specialist shops with a largely 1970s aesthetic, is of historic value. We take photographs of the things we think are important, says Tierney: of marriages, christenings and birthdays.

“The idea is that by photographing something you are making it important.”

So he sees these shops as important? “I don’t think they should be listed but I do think it is important to document the trade, not as heritage or for the aesthetic, but the depiction of what people were. I wonder will models be sold in the future? Will there be guitar shops?”

Architect Sean Rothery, in his introduction to the 2009 edition of his book The Shops of Ireland , noted the huge changes in the three decades since the first edition, written in 1978.

“It was still possible in the 1970s . . . to see in many a town or village, a little shop that was unchanged, in function or appearance, for at least 100 years. Even in the cities, a few specimens of the unbroken tradition of vernacular shop design lived on. Now . . . Price’s Medical Hall on Clare Street is the sole unchanged survivor in the capital.”

Just as Rothery wrote of decades-old shops in the 1970s, many of the stores portrayed by Tierney are rare relics of the 1970s. Many are in the city centre, from Capel Street to Camden Street, and show how people still come into town to seek specialist suppliers.

“It is important to recognise these shops,” says Tierney. “A lot of times, by photographing things you can see them. Photography does objectify things, like putting them in a Petri dish.”

While a photograph flattens the shops to 2D, the glass windows offer incredible depth, from reflections of people, vehicles and the street – mirrored Victorian and Georgian buildings creating backdrops to brooms and Incredible Hulk model kits – to the products receding within.

The 3D effect is also in the paved plinths to the front, tiling to the side, in shadows, on-street displays and aluminium window surrounds.


Symmetry and regularity
The words splashed across the glass interest Tierney too. “There is a lot of text. You can read them as documents,” he says.

Shops offer a human story, says Tierney, with personalities displayed alongside goods for sale. “Someone has gone to the trouble of bringing things into the shop that he thinks will sell. A person has written in huge letters on the window, or has decided what to reduce in the guitar shop.”

Tierney, who trained as an architect, speaks of the mannered way in which architects and interior designers will create buildings but says, while an architect would never choose to create a window in the way that a local cab firm has, there is a language to the shopfronts. They are set within a framework: many of the shopfronts depicted are made with regular aluminium box sections, with a visually appealing symmetry and regularity.

This uniformity allows Tierney to group the photographs together to form a new composition, something Bernd and Hilla Becher did, with cooling towers for instance, showing both their similarities and differences and, perhaps surprisingly, that these industrial structures were actually individually designed, within quite a uniform structure.

Shopkeepers seem to be innately aware of this: Tierney asked each owner for permission to photograph their shops. “Most people kind of understood why. Some were pleased, more people would be curious.

“Sometimes I explained that it is like Mondrian and they said, ‘Oh, yeah, I know who that is’.”


Dublin Shops: Photographs by Paul Tierney , an exhibition of architectural photographs, is at the Irish Architectural Archive, 45 Merrion Square, Dublin 2