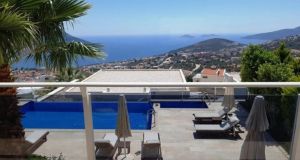 Matt O’Sullivan Estate Agent Auctioneer & Valuer is seeking €370,000 for the three-bedroom cottage below, on Coral Strand in Ballyconneely, Co Galway.

In Palazzuolo sul Senio, near Florence, this 300sq m (3,229sq ft) villa, which retains original features, was built in the 1920s. La Montanina has two livingrooms, an office, a diningroom and a kitchen on the ground floor. A 40sq m (430sq ft) terrace, with views over the garden and beyond, is on the first floor, where there are also three bedrooms and a bathroom. The attic floor has an additional two bedrooms and a bathroom. There are also a basement and garage.
Price €370,000
Agent mizarimmobiliare.com

With views of Kalkan Bay, this 310sq m (3,336sq ft) house with infinity pool is less than 10 minutes’ drive, or a half-hour walk, from the beach, marina and old town. It has an open-plan kitchen, living and diningroom, with patio doors to a terrace large enough to dine on, beside which is the infinity pool. There are also three bedrooms, three bathrooms and a separate toilet. The washing machine and tumble dryer are in an outhouse.
Price €368,140
Agent spotblue.co.uk

In Segré, this renovated six-bedroom house comes with a separate gite and private wood. Inside the main house is a livingroom with exposed beams and large open fire, plus a diningroom that is connected to a kitchen (and utility), which in turn leads to a conservatory. There are also two offices at this level. Upstairs are the six bedrooms. The gite has two bedrooms. Outside are a pond, a garage, a hall with a stage, and the woods, through which lit avenues run.
Price €371,000
Agent frenchestateagents.com

In Barcelona’s Gothic quarter, or Barri Gòtic, close to the Ramblas and the Mediterranean Sea, this renovated 90sq m (968sq ft) apartment has, among other original features, exposed wooden beams in its high-ceilinged living- and diningroom, beside its kitchen. It also has a balcony. With two bedrooms and a bathroom, it is on the second floor of a building on Calle d’Avinyó. The surrounding area, with its narrow medieval streets, has quiet squares despite being a tourist hub.
Price €370,000
Agent idealista.com