Take five: Sea views in Donegal, a medieval village in Tuscany or a Scottish farmhouse 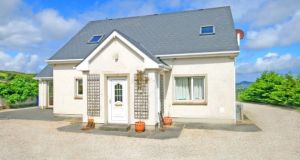 Between La Canalosa and Hondon De Los Frailes – north of Murcia – this property is divided into two. The main house has a living room with fireplace (opening onto a terrace), a kitchen, bathroom and three bedrooms. A separate apartment has an open-plan living room/kitchen, a bathroom and three bedrooms. Energy comes from solar panels and an electricity generator. Fruit growing in the garden includes almonds, figs, olives and grapes. There is a garage and store outside. Price: €164,950

In the medieval village of Filattiera, this three-storey, 500sq m (5,382sq ft) stone house was built in 1600. Period features include frescoes, stone stairs and fireplaces, as well as vaulted cellars. There are 26 rooms in the property, which needs work, including living spaces and 13 bedrooms. Outside are terraces, courtyards and a split-level garden, while in the countryside beyond are hills and woodland. The house, in Lunigiana, north Tuscany, is just under an hour from Pisa, Genoa and Parma airports. Price: €165,000

For €162,000 you can buy a whole hamlet, in Lalinde, which comprises two houses, a garage, barn, shed, summer kitchen and other outbuildings. One house measures 67sq m (721sq ft) and has a living room, dining room, kitchen, shower, three bedrooms, balcony and cellar. The second house has a living room, kitchen/diner, one bedroom and bathroom. The property comes with over three acres (1.3 hectares) of land including a vegetable garden, chicken run, woods and meadows. It is 18km from Bergerac.

With views of the Spey Valley and Glen of the Rothes, this stone farmhouse needs an update (although it does have double-glazing). Accommodation includes a living room, dining room, eat-in kitchen, a bathroom and two bedrooms. The house is north of the Cairngorms National Park, two miles from Rothes, 6.5 miles from the Speyside, whiskey town of Aberlour and a 15-minute drive from Elgin near the coast of the North Sea. The property is reached via a drive and sits in its own gardens. Price: £145,000 (about €164,900)

Should your pasta drip like Colin Firth as Mr Darcy? The eight rules that explain it all
4

What can you buy for €275k in Portugal, Spain, France, Greece, and north Co Dublin?
8

Some pubs are reopening. Here’s everything you need to know about how it will work
Real news has value SUBSCRIBE