DNG Tormey Lee is seeking €350,00 for a three-bed bungalow in Co Meath 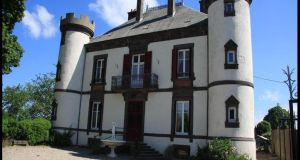 DNG Tormey Lee is seeking €350,00 for this three-bed bungalow on 0.64 acres of industrial zoned land in Ballybin, Ashbourne, Co Meath.

This renovated château with eight bedrooms and five bathrooms is in a walled garden with a swimming pool, garage, pig-house and mature trees. In the village of Giat, the three-storey property measures 262sq m (2,820sq ft). Accessed through wrought-iron gates and into a gravel courtyard, the château has a kitchen, livingroom, diningroom, office/library and toilet on the ground floor. On the first floor are four en suite bedrooms and a toilet. Above that are four more bedrooms, a playroom and bathroom.

Close to the city centre, near Brivibas main street and beside Dailes theatre, this newly modelled two-bed apartment is on the fifth floor of a historic building, and retains its tall windows, high ceiling and a fireplace. The common areas have also been updated, with a refurbished staircase and new lift. All of the windows overlook Stabu street. The apartment has a large livingroom with fireplace, two bedrooms and two bathrooms. Price: €345,000 Agent: BaltEstate.eu

In the ancient hilltop town of Arpino, this five-bed house and gardens are walled, bringing privacy. The villa was built in 1937 in a streamlined form of the Art Deco style. In line with the aerodynamic and nautical look, a balcony runs the length of both floors. Downstairs are two livingrooms, a bathroom, and kitchen and diningroom with French doors to the exterior. Up Carrera marble stairs are three bedrooms, two of which open to a balcony, and a bathroom. There is a guest wing with two bedrooms, which forms a courtyard with the main house. The gardens are filled with fruit trees and there is a tunnel to a secret garden. Price: €350,000

Down the coast from Casablanca, this 700sq m (7,535sq ft), six-bed, four-bathroom traditional Moorish riad, sits above the banks of the Oum er-Rbia (Mother of Spring) river, within the walls of the ancient medina of Azemmour. The last owner of the two-storey, 150-year-old property bought it in 1964 and spent 20 years restoring it, using traditional Moorish Zillij tiles and patterns. At the centre is an atrium with open-air skylight above a granite fountain, ferns and flowers, and bay windows overlooking the river. The house contains a pool, hammam and Moorish bath. The walled garden has a riverfront promenade. Price: £311,220 (about €352,241)