Swapping Stoneybatter for the Wicklow hills 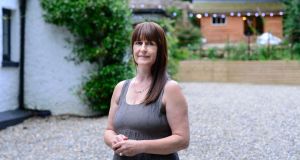 A windfall sum of money set Lisa Wilkinson on the road to owning her own home in Dublin city, a lucky purchase that allowed her to follow her dream when the area became hip and allowed her to cash in.

When she bought her two-up, two-down on Sitric Road, Stoneybatter in 2001, among the property’s more notable features was a commode in every room.

“The house had 17 layers of wallpaper, no central heating and the kitchen was a prefab lean-to at the back,” recalls Wilkinson. “The toilet was out back in the coal shed.”

Undeterred, Wilkinson bought the property for IR£102,000, using share money from her time at Baltimore Technology, where she worked as a marketing manager.

“The Stoneybatter area reminded me of home,” says Wilkinson, originally from the north of England. “I had lived in Donnybrook previously, where the neighbours would barely look at you. The first afternoon I walked down the road in Stoneybatter, half a dozen people must have said ‘hi’.”

Still, it being 2001, this was some time before Stoneybatter’s swift ascent to becoming a highly desirable area for young, professional, creative types. And right before the great gold rush in Dublin 7, Wilkinson bought a unit on North Brunswick Street – a derelict woollen mill building – and opened The Elbowroom, a yoga and wellness hub.

And the area’s gentrification meant that Wilkinson wouldn’t just “flip” property when she decided to sell her Stoneybatter home: she could “flip” her life entirely.

For years, there was no firm plan in place to move anywhere: the Stoneybatter property, by now refurbished to a high spec and with a two-storey extension added, had been doing brisk business on Airbnb. Wilkinson herself had moved to a rental property on the North Circular Road, so that her children Tuilelaith (14) and Seán (8) could enjoy a home with a garden. Yet Wilkinson had idly daydreamed of a move to the country.

“I always wanted to be Felicity Kendall in (BBC sitcom) The Good Life,” she smiles. “I had a dream to run away. I did a small hoarding course years ago and grew my food in polytunnels. So for the last six years, I’d checked on to property sites, every four months or so, to see if there were any good country properties for sale. I’d seen all these derelict properties in Offaly, North Co Dublin, Longford… but nothing spoke out to me.”

Yet one afternoon, Wilkinson came across an intriguing prospect on her own Facebook feed.

“This picture of a cottage popped up with the caption, ‘For sale, one careful owner’,” recalls Wilkinson. “I realised that it was a place in Wicklow that I’d held bootcamps of my own in years previously.”

Despite having just one careful owner, the cottage – sitting on one acre of land at Donard (just south of Blessington) – had previously been the site of the old Ballinclea Hostel. Hikers, backpackers and mountaineers had availed of dorm rooms and shower blocks; the vibe was decidedly no-frills.

Job done on clinching the cottage, Wilkinson was keen to put her plan into effect: to create The Elbowroom escape, a wellness retreat a short drive from Dublin.

“I was a cash buyer, as I’d had some savings, and I looked at getting a commercial loan but doing up a business plan was something I’d never done,” she recalls.

Just over a year ago, Wilkinson sold her two-up, two-down on Sitric Road, after a heated bidding war, for €317,000. The property had been on the market just 12 days.

She may have had a decent lump sum to renovate her new property, but even at that, the path did not run smoothly.

“Stupidly, I started work on the place before the sale went through properly . . . that was really risky,” she recalls. “I remember in September, the contract was still awaiting one signature. That was a real low point for me as I’d spent tens of thousands by then. I couldn’t cope, and I crumbled. The day the sale finally went through, I walked into the front yard, quietly got an axe and hacked the For Sale sign to pieces.”

An even more ambitious plan was afoot by mid-September 2016: to have The Elbowroom Escape ready for business by December. The first phase of development was to landscape the acre of land, to create the pathwork, to renovate the sleeping quarters on the grounds (for 18 people), commercial kitchens and yoga space, to create a wood cabin that would serve as a dining area for 20 people, and to erect an outdoor pergola that could hold hammocks. From her budget, €9,000 was spent on 18 hotel-quality beds. Wilkinson herself designed the bespoke furniture in the rooms from spalted beech that was sourced locally (designer Justin Thomas made each piece to spec). And the end result boasts a “boutique hotel” feel in each room.

“I became a Pinterest fiend, and used social media to decide on the colour schemes and palettes,” explains Lisa. “Because I have lived in a rental, I had this huge bug to decorate and get nice stuff. I had ‘early Bellinter House’ in mind. I wanted elegant and contemporary, not necessarily bohemian. It’s the same in The Elbowroom; I’ve never been one for ‘ohms’ and lentils. It’s always been funky and cool.”

In the second phase of The Elbowroom Escape’s development, completed earlier this month, an outdoor, wood-fire hot tub was installed, the greenhouse was erected, and the renovation/modernisation of the cottage itself was completed.

The cottage itself was redesigned with a dual purpose in mind: to function, in the short term, as a wedding destination, and, in the longer term, as a bolthole of Wilkinson’s very own.

Structurally, the cottage needed little work, and Wilkinson was mindful to retain many of its original features. But there was enough room in the mix for a statement piece or two: “During my online browsing, I realised I wanted an impactful living room wall, and I came across a UK company (Photowall) that takes a photo and creates a wallpaper out of it,” Wilkinson explains. “I decided on Van Gogh’s Almond Blossom print.”

By anyone’s standards, it has been a mammoth, intense and breakneck undertaking.

“I was managing lots of people and all that money was haemorrhaging in one direction,” recalls Wilkinson. “I had an army of friends that came in to help, but it was a very full-on time. I was up until 2am or 3am some nights, and trekking up and down the road to Dublin. I was on Etsy, Done Deal, all over the Internet trying to make it happen.

“If I were to do it again, I’d definitely have spent some of that money getting a project manager on board to deal with the builders. And I’d probably do a little more planning before I started.

“I’d learned a big lesson from (renovating) The Elbowroom in Stoneybatter: don’t put people on day rates,” she adds. “The landscaping started to run amok for that reason, but I managed to pull the plug.”

Job largely done, and under budget to boot, Wilkinson is about to embark on Phase 3 of the project: erecting a pottery shed, fixing the cottage roof, and creating her own private permaculture garden to the rear of the cottage. Meanwhile The Elbowroom Escape has already hosted a number of events, from a ‘Do F*** All’ weekend and family summer escapes to artists’ residencies and ‘Earth to Plate’ dinner evenings. Proving that it’s open to different forms of ‘wellbeing’, plans for a gin tasting weekend are also under way.

“The next plan, really, is to enjoy it,” notes Wilkinson. “Every time I arrive up here, I have a real ‘exhale’, and I get this, ‘thank God I did this, it’s so beautiful’ moment.

“I did have some great help along the way, especially from The Elbowroom’s Amanda Marron, who was great in the event of a meltdown. But I made the conscious decision to just get it all over and done with. There has definitely been a cost in terms of my stress levels. Could I have done things slower? It’s not really in my personality, to be honest.”