Ciara O’Toole: In Italy many of her friends were restoring aircraft, salvaging parts and giving them “a second lease of life”. That second chance idea chimed with her and turned into a business plan

Ciara O’Toole is an adventurous spirit who left a career in marketing to live in Lake Como with her husband in 2007. Six months later the marriage broke-up. However, O’Toole decided to stay on and found her wings setting up an independent marketing consultancy company; the Cat’s Pyjamas.

During this time she also learned to fly seaplanes at Aero Club Como, a few miles from her base in Molina, which she discovered while looking for the motor tax office. She chronicled her experiences in Flying Solo, a book she self-published with the help of independent publisher Kazoo.

It’s the kind of resumé her heroine Amelia Earhart – the pioneering aviator who flew from Newfoundland to Derry to become the first woman to fly solo across the Atlantic – would have approved of. Without a doubt it has inspired her latest endeavour; a high-end furniture range she calls Amelia made from repurposed aircraft parts.

The experience gave her a fresh perspective and although getting her private pilot’s licence “almost bankrupted” her it is a pastime she is reluctant to give up. “I love flying and through it have become fascinated by planes and their engineering.” 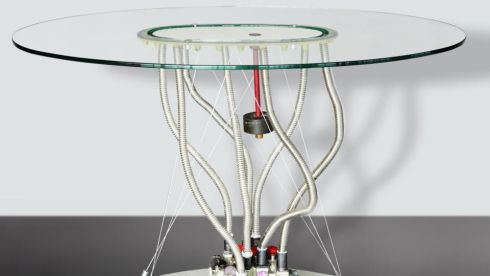 In Italy many of her friends were restoring aircraft, salvaging parts and giving them “a second lease of life”.

That second chance idea chimed with her. She started to think about repurposing some of the many parts that make up an aircraft and this turned into a business idea. “With half the world’s leasing companies based in Ireland I thought, this might fly.”

She started actively looking for someone to fabricate the ideas that were in her head. Furniture and lighting designer Shane Holland came highly recommended for his metalwork and for his tradition of repurposing – seeing new uses in old objects. One of his designs, Borscht chandelier, was made using green wine bottles.

He got O’Toole’s angle and was attracted to the project, she explains. Together they went through about 20 parts from a Boeing 737 to select the best components to form the first collection.

One of the star pieces is a glass-topped conference table with a base made from an engine casing split in half. You can still see the scorch marks where the fuel would meet oxygen.

“Slipstream” is a cantilevered table made from fairing whose original purpose was to reduce drag under a wing. Badly weathered – this aircraft had 60,000 miles on the clock – it took six coats of paint to give it new lustre. Internally, kilos of resin had to be delicately poured into it to counterbalance the weight of the glass top. The professional finish was the result of “a lot of gymnastics going on in the workhouse”, as Holland puts it. The table has a Carrara marble base that was cut and polished by Donore-based James Gogarty stonemasons.

A console table featuring a blue nose landing gear door, one of two used to cover the front wheel of the aircraft, features aluminium struts designed to evoke the biplanes favoured by the brands namesake.

“Rocket” is a cabinet made from a wing edge that is perfect for storing bottles. New doors were fabricated and the piece is set on a Connemara marble base.

Another table, “Medusa”, was fashioned from a fuel tank access panel with the red magnetic fuel level indicator still in evidence and steel wire lines to its Cararra marble base.

O’Toole’s branded enamelled signs distinctly mark each piece and she plans to work to commission but will be showing these first five select designs at a launch to be held at the Irish Aviation Authority on October 7th.

It is the art of adventure that continues to thrill her but she has some heavy hitting co-pilots helping her navigate the turbulence of the start-up phase. Irelandia Investments, headed by Declan Ryan, has given her seed capital to expand the business and she’s being mentored by design consultant Aileen Dempsey.

She expects corporations in the aviation industry to be her first buyers where the appeal of the masculine designs are likely to be be appreciated, especially in the context of such a historic name.

There’s no shortage of material, she says and there are no rules. “Every part is unique and no two pieces are the same. As the brand develops I can see the collections getting quite discerning and using distinguished pieces.”

Prices starting from €8,000 and cruise to stratospheric five figure sums.

Price of coastal homes ‘soars in wake of pandemic’