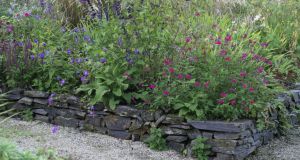 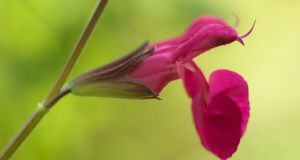 I have a new love in my life; no, not the human variety , but a vast, versatile and geographically diverse genus of plants that are extraordinarily colourful, aromatic, long flowering and easy to both cultivate and propagate, while their nectar-rich blooms are adored by bees, butterflies and moths.

I’m talking, of course, of salvias, and in particular of the many different shrubby perennial varieties – some moderately hardy, others more tender – that have been introduced in recent years, and whose flowers add such jewel-like brilliance to a summer border or container.

One such example is Salvia ‘Amistad’, the theatrically beautiful Argentinian variety introduced in 2012, which produces its black-stemmed, magenta-coloured flower spikes from May until the first frost.

A tall, airy plant that requires full sun and a free-draining soil like most shrubby salvias, it reaches an average height and spread of 1-1.5m x 90cm. Those dramatic flower spikes look wonderful grown alongside the purple umbels of Verbena bonariensis and the feathery inflorescences of tall grasses, or used as a foil to fiery-coloured dahlias. Classified as frost hardy, Salvia ‘Amistad’ needs winter protection in cold gardens (see growing tips below), a small price to pay for months of sumptuous summer colour.

For something more fiercely colourful, I like Salvia microphylla ‘Cerro Potosi’ (height x spread of 80cm), another exceptionally long-flowering, shrubby perennial variety that hails from Mexico, with aromatic foliage and shocking, electric-pink flowers that will have you reaching for your sunglasses. Despite its dainty good looks, this salvia is famed for its toughness, as long as it’s given full sun and sharp drainage. But don’t just take my word for it.

“If you only have room for one salvia, then grow this one,” says William Dyson, whose Kent nursery (dysonsalvia.com),is famous for its mouth-watering selection of salvias, including several he bred himself.

This summer I’m growing ‘Cerro Potosi’ in a container in combination with Pennisetum villosum ‘Cream Falls’, a graceful perennial grass that enjoys similar growing conditions, and which produces its fountain of fluffy white flowers throughout the summer months.

Dyson Nursery was also responsible for introducing the new, Australian-bred variety Salvia ‘Love and Wishes’ to visitors to last month’s RHS Chelsea Flower Show. Such was its immediate popularity that stock of this seductively beautiful, magenta/plum-flowered variety, which blooms from early June until the first frosts, is already proving difficult to track down. In which case, I suggest cadging a softwood cutting or two from an obliging friend. ‘Love and Wishes’ is the third in the ‘Wish’ series of salvias that includes the equally garden-worthy ‘Wendy’s Wish’ (magenta-pink) and ‘Ember’s Wish’ (coral-rose).

Yet another shrubby salvia that I’ll be growing this summer, if a generous gardening friend makes good on his promise to give me a plant, is Salvia x jamensis ‘Nachtvlinder’ (height and spread of 60-75cm) which originated in the famous Dutch nursery, De Hessenhof. Reputedly hardy if given a sharp-draining soil in full sun, its dark plum/purple hooded flowers appear from June until September.

But the horticultural sweetie-box that is shrubby salvias doesn’t end there. Looking for a pure-red flowering plant to add some sustained drama to your summer border or container? Then try the Dutch-bred Salvia ‘Royal Bumble’, another unusually long-flowering variety (June-October) whose relatively compact size makes it a good choice for the smaller garden.

Extrovert gardeners will also love Salvia ‘Hot Lips’, a Mexican variety whose bi-coloured red and white flowers live up to the promise of its name. For something more restrained, I suggest the compact, bi-coloured Salvia ‘Dyson’s Joy’ (deep pink/ pale pink) which flowers from May until November.

Or the pale peach flowers of Salvia ‘Crème Caramel’, which blooms from May-November, perhaps grown in partnership with the delicately beautiful Dahlia ‘Café au Lait’. I’m also a fan of the dusty- pink, long-flowering Salvia ‘Smoke’.

But a warning when ordering the latter. Don’t, as a friend did, refer to it as ‘the smoking salvia’, which is a different Mexican species altogether (Salvia divinorum) – one whose leaves, if chewed, have powerful hallucinogenic properties. Didn’t I say that this was a remarkable versatile genus?

Finally, some growing tips. While most of the salvias mentioned above will survive an average winter in most Irish gardens if given free-draining soil and full sun, it’s worth insuring against losses by taking some softwood cuttings in late spring. Given a little bottom heat in the form of a heated propagator, these root very quickly . For detailed instructions, see dysonsalvias.com. But if your garden is very cold, lift plants and overwinter them under cover. Prune plants back in spring to encourage new growth, regularly deadhead plants to keep them in flower, and give pot-grown specimens an occasional liquid feed.

Finish planting out bedding and tender plants into containers or gaps in the border. These should be properly hardened off and well watered before planting into well-prepared soil. When planting into containers, add a small amount of slow release fertiliser to help sustain flowering. Last but not least, don’t forget to take proper precautions against slugs and snails, which can do terrible damage overnight to soft, young growth.

Keep a beady eye out for the adult vine weevil, the garden pest whose larvae (white, legless grubs about 9mm long, and easily identified by their light brown heads) greedily feed on plant roots, resulting in checked growth or plant death. The flightless adult beetle typically emerges around this time of year to feed on plant foliage at night, leaving its distinctive ‘ticket collector’ cut on the leaves. Just one female can lay several hundred eggs, so it makes sense to trap and kill them when you can. For detailed advice on how to identify/ control this garden pest, see rhs.org.uk

Now is a good time to sow leafy salad varieties, beetroot, radishes, carrots, peas, turnips, annual spinach, Florence fennel and kohlrabi. For best results, use good quality seed; cheaper brands may seem tempting but often turn out to be a poor economy in the long run, with much lower germination rates.

How couples can cope better with the coronavirus shutdown
6

Minding my disabled daughter: 'I don't want to do this any more'
7

The Kerryman working for a charity in Melbourne: 'It's a challenging time'
10