Snap them up quick: Life at the top in Dublin property

For those seeking a place, a property to rent out, or Airbnb, these apartments have potential 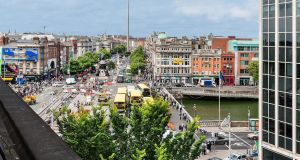 The view from number 10 in the Lafayette Building, Dublin 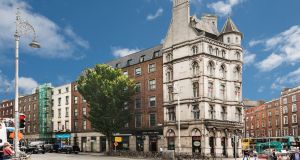 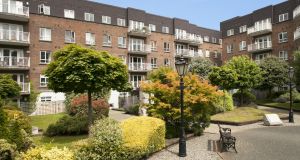 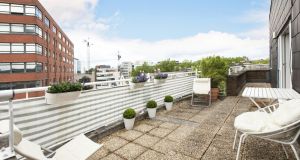 The balcony at 146 Harcourt Terrace 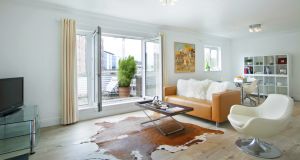 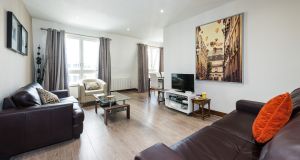 The shortage of Dublin city centre accommodation for both long and short-term rentals means that two properties, new to the market this week, are unlikely to be available for long.

The first of these is an apartment in one of the capital’s most distinctive buildings – the Lafayette Building at the junction of Westmoreland Street and D’Olier Street, Dublin 2. A one-bedroom unit is for sale here, through Finnegan Menton, asking €290,000.

The six-storey over basement Lafayette Building was redeveloped by the now insolvent Treasury Holdings, in the late 1990s, when the three top floors were converted into 14 apartments.

Most of the apartments are not in the elegant original 1890s building – which houses the Blood Bank on the second floor – but in a modern extension to the rear, with an entrance from D’Olier Street.

Number 10 – the one-bedroom unit for sale – is in the new part of the building, at the point where it joins the old.

There are large windows throughout with views of O’Connell Street and The Liffey .

The Lafayette Building was built for the Liverpool and Lancashire Insurance Company and that company’s name and livery can still be seen above a doorway to the building, carved into Portland stone.

The building’s architect JJ O’Callaghan also designed a range of Dublin pubs, including Mooney’s on Harry Street and the former Dolphin Hotel at Essex Street, which was later used as a children’s court.

Number 10 has been refurbished in the past nine months and is presented in very good order. It has a small entrance hall, with intercom, to the main entrance.

The livingroom is spacious and bright with wide plank polished timber flooring. A surprisingly large kitchen leads directly off the livingroom, with space for a table and chairs, and a picture window looking to the River Liffey.

The bedroom is a spacious double, and has good fitted storage. The updated bathroom has built-in mirrors and storage. Many of the Lafayette’s apartments are being let on a short-term basis, while long-term tenants have, in the past, rented out their units for special events (such as St Patrick’s Day or New Year’s Eve) on Airbnb at premium rates.

The prime location between the city’s two shopping districts makes it particularly suitable for short-term lets, while its proximity to Trinity College Dublin and the International Financial Services Centre (IFSC) make it attractive for longer rental periods.

There are some drawbacks to the location, however – there’s a nightclub at the base of the building and there is heavy traffic on all sides – with Westmoreland Street one of the busiest bus corridors in the city. The service charge is also a little steep at €1,688.92 a year.

Meanwhile, at the other end of town, auctioneer Owen Reilly is taking advantage of the good weather to showcase a penthouse apartment with an outdoor terrace at 146 Harcourt Terrace, off Charlemont Green, in Dublin 2.

The three-bedroom, two-bathroom unit is fresh on the market, with an asking price of €450,000. According to Reilly, it could attract a rent of €2,500 per month. The 90sq m (968sq ft) apartment is in a quiet, gated development with secure, underground parking.

Number 146 has also benefitted from a recent refit, including an updated kitchen, and a large, bright livingroom with smart timber flooring. A step leads up to wide double doors, opening onto a split-level patio, with views towards the city centre. The management charge is just over €2,000 per year.