Robots and modular homes: are we ready to step into the future?

Technological advancements are set to revolutionise the way we live 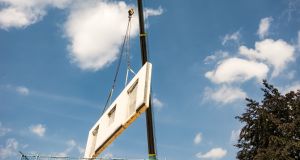 New kind of living: modular housing is constructed in factories and quickly assembled on site

I recently attended a lecture in Edinburgh given by a Japanese professor of robotics, who had pioneered the development of marine robotics and even created a robotic dolphin.

I discovered that robotics has now reached a tipping point where it is more economical to use a robot to do many jobs than the cheapest worker in a developing country.

Some predict that in the next 30 years up to 50 per cent of jobs will be replaced by robots. The coming of robots has been much heralded from the 1960s onwards, but when you see the latest developments – such as the Asimo Robot which can walk up and down stairs and kick a football – then you have to concede that the time is fast approaching when robots will start appearing in our own homes.

If such super-modern technology is about to revolutionise our lives, then it would be odd if our houses themselves did not undergo a technological revolution. What will our homes of the future look like and what will be different from today?

One form of housing which could revolutionise our future is modular housing – prefrabicated units constructed in factories with all the latest energy-saving devices (solar panels, smart energy systems) incorporated into the manufacturing process and then quickly assembled on site.

Modular housing would seem to have a lot going for it: many see this as a key means of helping to resolve the housing crisis leading to the mass construction of homes at considerably quicker rates – and potentially lower costs – than traditional bricks, blocks and mortar constructions.

But it is not without its problems. It is unclear, for example, what the lifespan of such structures would be, and whether lending banks might be hesitant to offer standard loans as security.

Where they might attract more investment is from landlords looking to offer them as rental accommodation, hoping to recoup their initial outlay in rental returns within a relatively short term.

But then there is the key question: do people actually want to live in them?

It is a curious phenomenon with robots, but the more human-like robots become (or animal-like in the case of robot pets) the more we are drawn towards them. Yet there is a certain point of human-like similarity where we suddenly become freaked out, where robots threaten to undermine our own sense of identity.

A key to determining the success of modular housing is not just considering the cheapness and efficiency of construction, but the degree to which people are able to stop thinking of them as mass-produced disposable units and more as individualised homes.

There is no reason to think we could not enjoy a future where our personalised robot greets us at our modular unit home. In such a Blade Runner-esque world, the danger is not so much that the robots will rebel against us, but rather that we will perform our own psychological rebellion against a style of living not sufficiently grounded in a sense of individuality and our yearning for historical continuity.