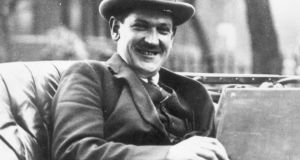 Michael Collins (1890 - 1922) in London for the treaty negotiations. Photograph: by Hulton Archive/Getty Images

Auctioneers of historical memorabilia enjoyed something of a boom in Easter Rising-related artefacts in the run-up to the centenary commemorations two years ago.

Now, with the looming centenaries of the War of Independence and the Civil War, a whole new category of material is expected to come to light. A major private collection due to be auctioned at Sheppard’s in Durrow, Co Laois next month contains some fascinating material, and the most interesting lots relate to Michael Collins.

A metal cross reputedly placed on the exact spot where Collins died in Béal na Bláth in west Cork is the most poignant and intriguing lot. Sheppard’s said it had been erected in 1922 as a temporary commemorative memorial. There is now, of course, a permanent memorial to Collins at the site. According to a letter with the cross, it was removed in 1926 after being “desecrated by Irregular Troops who used it for Target Shooting”. Sheppard’s said the letter was sent by Bill McKenna to “Seán, A Chara” – unidentified but believed to be Seán Mac Eoin.

Sheppard’s said “such a highly-prized object [as the cross] would only have been entrusted for safe-keeping to someone of integrity and standing within the pro-treaty community. It is known that Mac Eoin held personal items relating to Michael Collins” at his Athlone home. In the letter McKenna asks Mac Eoin to “Keep it [the cross] safe and well and pass it on to future generations so they will never Forget a Great Man and a Brave Comrade and a true and Hearty Friend. God Bless Michael and Ireland”.

Seán Mac Eoin (born John McKeon) in Granard, Co Longford was a senior figure in the National Army – alongside Collins – in 1922. He later became a Fine Gael TD and died in 1973. But as a young man, he had trained to be a blacksmith at his father’s forge and later moved to Ballinalee, Co Longford to set up a new forge. He was known as the “Blacksmith of Ballinalee”.

Also in the auction is a copy of a rare 18th-century book called Farriery Improv’d – Or, A Compleat Treatise Upon the Art of Farriery. The book is accompanied by a letter from Mac Eoin, dated 1962, in which he states that it “was given to me by Michael Collins when he returned from Treaty Talks in London in ’21”. Collins was in London in 1921 leading the Irish delegation which secured Independence in 1921.

Although impossible to confirm, Sheppard’s suggested that Collins – during a break from the negotiations – might have visited the second-hand bookshops in Charing Cross Road and found what would have been an amusing and appropriate gift for his friend, Mac Eoin, the Blacksmith of Ballinalee.

The book, written by Henry Bracken, first published in London in 1738, is highly collectible – and, according to its title page, contains essential knowledge for a blacksmith. An explanatory title page summarises the contents: “Wherein is fully explain’d the nature, structure, and mechanism of that noble and useful creature, A Horse, the diseases and accidents he is liable to, and methods of cure . . .Together with . . . observations and remarks concerning the choice and management of horses. Likewise an account of drugs and mix’d medicines used in farriery”.

The estimate for the “Michael Collins Commemorative Roadside Cross”, now, inevitably, rusty, is €8,000-€12,000; and for Farriery Improv’d – Or, A Compleat Treatise Upon the Art of Farriery (not a first edition, but a later one published in London in 1756) is €4,000-€6,000. The high estimates reflect the huge interest that items associated with Collins always attract in salerooms.

But where did these wonderful items come from? Sheppard’s said they are part of a collection which the unnamed vendor bought from someone “who purchased it at a house contents auction in Co Tipperary in 1995”. The house had once been home to Felix Cronin and his wife, Kitty. And there’s the Collins connection. Kitty Cronin’s maiden name was Kiernan and she had been the fiancee of Collins at the time of his death. Later, in 1925, she married Cronin who had served in the army with Collins.

Other items in the auction – for which estimates are still being finalised – include a photograph of Collins, aged 12, taken in the gardens of the Ursuline Convent in Clonakilty, Co Cork; a marble stone from his grave at Glasnevin Cemetery inscribed “Removed from his grave By his comrade and friend Sean Mac Keoin [sic] August 25 1923 Rest in Peace”; a military trunk with the lid inscribed “General Felix Cronin”; and a box, containing hair slides and clips, inscribed Mrs Felix Cronin, Abbeyview, Lorha [sic – the correct spelling is Lorrha], Co Tipperary.

Collectors of Irish historical memorabilia won’t need reminding that items associated with Collins can fetch very high prices. In 2011, a collection of 28 letters from Collins to his sister Johanna (“Hannie”) in an auction in Dublin jointly hosted by Adams’ & Mealy’s sold for €202,000 – double the estimate.

An envelope containing a lock of tangled brown hair

But not all auctions go as planned. In 2012 auctioneers Adam’s announced the planned sale in Dublin of “an envelope containing a lock of tangled brown hair” which was inscribed “Hair of head of Michael Collins when laid in State in the City Hall August 1922”. The memento had been owned by Kitty Collins Sheridan (Collins’s elder sister) who gave it to a friend in the late 1950s. The vendor’s name was not disclosed. Adam’s had accorded it a top estimate of €5,000. But following criticism from Michael Collins’s grand-niece Mary Banotti, a former Fine Gael MEP, and grand-nephew Robert Pierse, a solicitor from Listowel, Co Kerry, the vendor withdrew the item from the auction and donated it instead to the National Museum of Ireland.

Sheppard’s said the auction entitled “The Irish Revolution and Beyond: Artefacts, Letters, and Mementos” would take place on Thursday, May 3rd. A catalogue is expected to be published next week.