Property bubble of 2000s not being repeated, Nama chair says 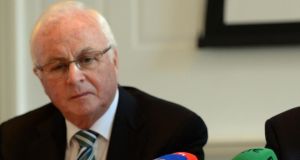 The number of ghost estates in the country is much less than was originally expected when Nama was first established in December 2009, Nama Chairman Frank Daly has said. Photograph: Eric Luke / The Irish Times

Nama chairman Frank Daly has played down suggestions of a property bubble similar to that of the 2000s, saying both lenders and borrowers are acting much more prudently in relation to house purchases.

Mr Daly said he believed it was now commercially viable for builders and developers to start building new houses, but he didn’t envisage a repeat of what happened in the 2000s when property prices soared.

“Despite the downturn and the actual drop in property prices, the actual cost of building has stayed pretty steady and it’s only now that the selling price has started to cut through that line of costs and it’s becoming commercial to start building again,” said Mr Daly.

“I think that will continue but there are probably enough safeguards in place with the banks with regard to lending to avoid that issue of a bubble in the future and I think people will be much more sensible and more realistic about the prices that they are willing to pay.”

The number of ghost estates in the country is much less than was originally expected when Nama was first established in December 2009, Mr Daly said, and many of those ghost estates that do exist have increased in value over the past year in particular.

“The way things are now, ghost estates have more potential than might have been expected a year ago. Two years ago we might have all been talking about estates that might have to be demolished, but certainly there are very few in Nama’s remit that will be demolished.”

Work on the Tannery in Bandon began in 2006 but the estate was never finished and the estate ended up in Nama who, in December 2013 appointed builders, Murnane and O’Shea to finish off the 24 housing units with a view to making them available for social housing.

Today Nabco began making the first of the two, three and four bedroomed houses available to the first of 24 families drawn from Cork County Council’s housing waiting list under its partnership deal with Nama.

Nabco chief executive Kieron Brennan explained that Nama will lease the properties on a 20 year and nine month lease to the Nabco Munster Co-op and the people will then pay a differential rent to the co-op for their homes.

“What you have here is different to the normal model of social housing - here you are creating a community of interest who will interact togetherand will have a certain degree of ownership and control over the estate and will look after this space before they even move in.”

Nabco president Declan Hudson said: “As a co-op member myself, I know the difference these homes will make to people’s lives. During the current housing crisis, Nabco has been grateful to work with Nama to secure much-needed housing for families across Ireland. ”

Meanwhile Mr Daly revealed that Nama have identified some 5,500 properties from its portfolio which it has offered to local authorities and housing agencies such as Nabco, and they have received confirmation of a demand for over 2,000 of these.

“We have also indicated that we can fund the building of another 18,000 to 20,000 over the next five years and within that figure, we would estimate that social housing would account for 10 per cent so that’s another 1,800 to 2,000 units for social housing,” said Mr Daly.