Priced out of Portobello? Try The Liberties 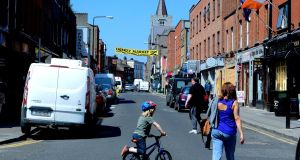 The Liberties name in itself is a captivating one, and embodies the idea of freedom and a rebel or independent spirit. The neighbourhood is called such because under the manorial jurisdictions of Dublin in Anglo-Norman times in the 12th century, The Liberties were connected to Dublin city, while at the same time maintaining its own jurisdiction: hence it was free or of liberty. In the 16th century much of the land came under the ownership of the Earl of Meath, upon the dissolution of the monasteries by Henry VIII, with the earl establishing the urban layout of the town.

A rebel spirit continued in the area through tradespeople in the 17th century, who established their stores in the area, largely through the Huguenots’ weaving crafts.

The trading nature of the town has continued to the present day in the form of two of the main thoroughfares, Meath Street and Francis Street, the former the market street, the latter the antiques street; they run horizontally from the Liffey from north to south, and together with Thomas Street and The Coombe, running east to west, form the central focus of the neighbourhood.

Yet while that criss-crossing of streets is the beating heart of The Liberties, the neighbourhood has a far wider spread. Starting at Winetavern Street, the area runs south down Patrick Street and Clanbrassil Street as far as the Grand Canal. It then runs west along that waterway as far Dolphin Road and Grand Canal View, before turning east and following what is now the Luas Red Line, before turning north past the eastern borders of both St James’s Hospital and St Patrick’s Hospital, and turning along the quays before meeting Winetavern Street once more.

Within The Liberties itself there are a number of distinct areas, notably The Coombe, Blackpitts, Warrenmount, Dolphin’s Barn, Maryland, Rialto, Merchant’s Quay, St James’s Gate and the St James’ Street area, together forming the area as a whole.

“A lot of buyers priced out of Portobello are looking further across to Dublin 8 and The Liberties,” says Victoria Bentley, Sherry FitzGerald Sundrive branch manager. The properties in the heart of The Liberties “tend to be a bit smaller, two-up, two-down. Moving further west towards Rialto the bigger houses are being bought by young professionals mostly. A lot of IT people of a young demographic,” adds Bentley.

What housing is in the area?

The Huguenot settlers began to develop housing in the late part of the 17th century called Dutch Billies, which are noticeable for their large gables facing out into the street: examples of such can be seen in The Coombe and Pimlico.

In the 19th century the Iveagh Trust developed a number of redbrick properties around the Guinness factory, erected close to the Dutch Billies, while throughout the 20th century waves of social housing schemes were built, with, developers coming into the area in the 1990s and early 2000s with speculative schemes.

“A lot of the Dutch Billies’ internal structures are still in place, but have been refaced,” says Stephen Coyne, Liberties Business Area business manager. “The artisan dwellings from the 1890s onwards can be found around Gray Street and John Dillon Street. The Iveagh Trust built a lot, as far east as Kevin Street. Social housing began in the 1950s, and continued right through to the 1970s.”

A number of one- and two-bed apartments are the entry point to the market, beginning at €185,000 for a one-bed at The Weavers or the Maltings. A range of one- beds run up to €245,000, largely for apartments, but also with a number of artisan-cottage dwellings on the market.

To get into a two-bed the market starts at €250,000 for an apartment at 52 The Barley House, and a number of developments on Cork Street, Usher’s Quay, South Brown Street and South Circular Road: the top end of this market at present looks to be circa €300,000, however, the demand for properties of this type is huge and the market price rising steadily.

At present two-bed houses weigh in just above that, starting at €300,000 for properties such as 7 Thomas Davis Street, 32 Rosary Road, 45 Reginald Street and 2 Colberts Fort.

The three-beds in the area, many of which are the DCC-builds previously mentioned, start around €375,000 at 4 O’Carolan Road, or €395,000 at O’Curry Avenue. A two-bed, period redbrick on The Coombe also goes for €395,000, and a three-bed redbrick period in Dolphin’s Barn, at 19 Ebenezer Terrace, is the same amount.

Breaking the €400,000 mark, one can buy a redbrick two-bed at 17 Grenville Terrace for €450,000: a home similar to the Portobello builds but just the other side of Clanbrassil Street. A three-bed at 20 Ebenezer Terrace is priced at €15,000 more, another €10,000 could buy a three-bed in popular Reuben Street. Larger redbrick  homes around Rialto and Dolphin’s Barn tip over into the €500,000 range, with addresses such as Merton Avenue and Donore Avenue. Those in better condition, and often semi-detached and refurbished, can run up towards €700,000.

The Liberties is a 15-minute walk to Grafton Street and O’Connell Street, meaning it is served by public transport in all directions throughout the city. It’s also a short walk to Heuston Station, the adjacent Luas line, and a short drive to the M50.

Third-level education is housed in The Liberties through Griffith College, BIMM Dublin Music College, the National College of Art and Design, Digital Skills Academy and The Liberties College. Those students are present throughout the day and night in The Liberties, and form an important and revitalising element of the community.

The Liberties has a charm that comes from its mix of old and new: that is the old markets and greasy spoons selling DVDs, detergents, dresses, dishcloths and dirty fry-ups, sitting side by side with shiny new hipster hang-outs. Legit Coffee Co, run a by a French-Brazilian couple, started the hipster wave in 2015, with their bespoke designed store, serving superb coffee and brunch. From their lead others followed, such as Two Pups, Tasty8 and Bounce Back. Noshington on the South Circular Road has a terrace front and back for sunny days on which to eat massive sandwiches or French toast.

The old guard of Mannings Bakery and Catherine’s Bakery still stand tall though, and corner the more traditional end of the market. Boojum will enter the market on Thomas Street shortly to bring their Tex-Mex to the party. Gaillot et Gray do a French-base pizza on Clanbrassil Street, the same street which houses Passion for Food, the best kebab shop in Dublin, serving naans and lamb Kurdish style.

Hipsters in need of some beard grooming can hang out at Craft and Co barbers.

This dynamism also stretches to tourist attractions. The Guinness Storehouse pulls in visitors from all over the world, as does the Teelings Distillery, the first whiskey distillery to open in Dublin in 125 years in 2015. Irish whiskey continues its comeback in the area it was traditionally associated with: the Dublin Liberties Distillery and Pearse Lyons Distillery have followed, with Diageo currently developing its own Roe Distillery.

In the evenings the area is famous for its bars, of which there are too many to mention but include the hip Thomas House, and The Lamplighter, a more traditional pub. However, there is a distinct lack of evening eateries outside of pub grub around the Thomas, Meath and Francis Street area. The Riddler does brisk trade on Cornmarket, but there is a need for restaurateurs to reinvigorate the food scene in the area after the 9-5 rush.

Two new hotels are set to open in the area in 2018, a Hyatt on The Coombe and a Maldron on Clanbrassil Street. New student accommodation has already opened on Mill Street, with more to follow at the same location. A third student accommodation unit is opening on Thomas Street in September.

Diageo has also recently announced plans to partner with a developer to turn 12.6 acres of land into a new urban quarter called the St James’s Gate Quarter, which will encompass housing, offices and retail. A decision on a development partner is likely to be announced between October 2018 and April 2019.

The Tramyard on Carman’s Hall is being developed by Salamisso, which has built 12 apartments in phase one, and will build 13 in phase two.

Newmarket Square is also being regenerated, with plans under way to develop offices, a hotel, apartments and a microbrewery. This, however, is at the expense of the Newmarket Collective market, which is currently trying to find a new home as the square prepares for the start of construction.

Iveagh Market is also up for refurbishment. The lease to the historic Victorian structure was owned by Martin Keane from 1997 to this year, but Dublin City Council have said it is going to retake possession after the developer failed to make progress on a planned market, restaurant, hotel and music venue. Keane plans to fight the decision.

Dolphin’s Barn is another segment of the area that has recently had DCC regeneration announced.

There is still much regeneration to be done, including public works at Saint Theresa’s Gardens, Bridgefoot Street and the ongoing work at Dolphin House. Furthermore, Cork Street remains dilapidated and in need of change, while the former Player Wills cigarette factory on South Circular Road remains vacant and controlled by Nama.

But without question this historic area of Dublin is experiencing a long overdue renaissance.

Elon Musk: Grimes and I have this debate of ‘Are you more crazy than me?’
6

Consuming less, but better – the delicate balancing act of the circular economy
8

The complexities of trying to forgive others
9