‘I was feeling so lonely. Moving to Dundalk changed my life’

Louth Co. Council is one of the few local authorities in Ireland using its CPO powers to bring vacant properties back into use, Joe McGuinness and Colm Lambe talk about some the properties they are renovating or have renovated. Video: Ronan McGreevy 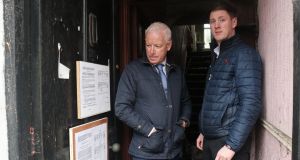 At the end of 2015, Louth County Council acquired 3 St Bridget’s Terrace, Dundalk, a two-bedroom cottage in a derelict state in need of full refurbishment.

Once the council had fully restored it it was offered to Peter Thornton, a widower, whose life has been marked by multiple tragedies – his wife and four of his children have died in separate incidents. He had been living in an isolated location in Ravensdale outside Dundalk.

“I was feeling so lonely, I asked for a transfer. I would go home in the evening time at 3pm, and that would be it until the following morning. When I woke up in the morning all I could see was a field, a horse and a cow. Now I am walking everywhere, and I am among people. I can talk to and see people.” He says that moving to Dundalk has been a life-changing experience for him.

The move was part of an initiative by Louth County Council to start applying its powers under the 1966 Housing Act to place a compulsory purchase order (CPO) on vacant or disused properties.

In the same year, two adjacent houses in Delargy Avenue, Dundalk, had been magnets for anti-social behaviour. The houses stood out like broken teeth among the adjacent well-kept homes in the Muirhevnamore estate, a mature estate where half the properties are privately owned.

Regularly occupied by squatters and drug-users and used as dumping grounds, the walls were covered with graffiti. Things got so bad that the council could not find tenants for properties in the same estate despite a waiting list in Louth of 4,000 households.

“We couldn’t re-let our own houses because of the units beside them,” recalled Louth County Council director of services Joe McGuinness.

The two houses were privately owned, but, in arrears with the banks, the owners had walked away from the properties years ago. When nobody came forward within the requisite one-month timeframe to appeal the decision to An Bord Pleanála, the two houses came under the control of the council.

According to the latest census figures, there are 245,460 vacant dwellings in the State, of which just 62,148 are holiday or second homes. However, any effort to tackle this by local authorities has been desultory. Taoiseach Leo Varadkar and Minister for Housing Eoghan Murphy have cited Louth as an example for other local authorities to follow.

At a recent housing summit local authorities were asked to bring forward their vacancy action plans, and to examine the website vacanthomes.ie with a view to using their compulsory purchase powers. A spokesman for the Department of Housing said Louth County Council was an exemplar that other local authorities were looking at.

“The CPO initiative by Louth County Council illustrates the value in bringing under-used housing stock into productive use. The department understands that other local authorities have been in contact with Louth County Council with a view to evaluating Louth’s approach to reactivating recoverable and liveable homes through the CPO process, and do plan to follow Louth’s lead in this respect where necessary.”

The two men behind Louth County Council’s CPO initiative are McGuinness and Colm Lambe, a civil engineer with the council.

It is a “simple process”, says McGuinness, and much less complicated than any of the alternative ways of providing social housing.

Once a vacant property is identified, an order for possession is posted outside the house and in local newspapers. If an owner does not come forward within a month, the property becomes the possession of the council.

If an owner does come forward, he or she is offered compensation, but only to the value of the house as it was when it was purchased. One owner was offered €5,000 for his property. A further €60,000 was spent getting it into a habitable state. The most the council has paid for a compulsorily purchased property is €140,000. In some cases owners have not come forward, and the properties have been acquired for nothing.

Compulsory purchase, says McGuinness, is cheaper and much quicker than the alternative, which is to build new housing units. It takes between nine and 12 months to convert a property which has been compulsorily purchased into a home. It would take at least three years to build an equivalent estate of 54 houses – the number already brought back into use by the council.

The average cost of bringing vacant properties up to standard is between €60,000 and €70,000 in comparison with the €190,000 which is the unit cost for a three-bedroom house, according to the Department of Housing.

Along with increasing the social housing supply in a cost-efficient manner, the process has unintended benefits. By repairing and bringing properties back into use, the council is reviving the entire area.

“We change the neighbourhood because nobody wants to live beside a house which is likely to have damp or vermin or anti-social behaviour,” says Lambe. “We have not had a single objection when we put houses back into use.”

A case in point is 26 Castle Road, Dundalk, which is in a row of handsome redbricked Victorian houses. Only the weeds growing in the front garden and the moss along the door frame indicate the true state of the house.

Inside the roof has caved in and there is detritus everywhere. Cobwebs hang from every crevice. It smells of decay and damp, and may not have been lived in for the last 20 years. Neighbours contacted the council after it became a structural menace.

This will be a major project for the council, but worth it. “It’s a three-bedroom house in an excellent location, and it will make a lovely family home,” says McGuinness.

Another advantage of the process is that many of the properties are already in established areas with access to services.

McGuinness’s advice to other local authorities is to go after the banks. Louth County Council has compulsorily purchased vacant properties held by the banks, which the banks have failed to place on the market, presumably in the hope that property prices would rise higher.

“Most of them whinge but we go ahead with it anyway,” McGuinness says. “If one bank came forward with their vacant properties portfolio and offered it, that would amount to a cost-saving for local authorities. If that was addressed we could get huge tranches of properties that are in the possession of the banks.”