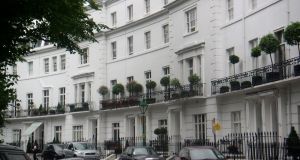 Egerton Crescent in Chelsea, London: the local council has asked Northern Ireland couple Martin and Francesca Shields to remove a security camera and security light on the front of their house on the street and to repair the wall

A Northern Ireland couple who own the largest house on Dublin’s Shrewsbury Road have been ordered to remove security equipment from the front of their mansion on Egerton Crescent in Chelsea, London. The house appeared in the UK property price register as having traded hands in July 2010 for £9.7 million (€11.33m) and two years later Francesca Shields (McWilliams) was granted planning permission to refurbish the house.

Last year, the local council’s enforcement division took issue with unpermitted security equipment fixed to the home’s facade. An application for planning retention was submitted, however in recent weeks the council refused the application and served notice upon Ms Shields and her husband Martin requiring them to remove a security camera and security light, along with repairing resulting damage to the wall.

Egerton Crescent is regarded as a top London address, located just a short stroll from Harrods in Knightsbridge. Two houses on the row have traded hands in recent months for over £15 million each.

Mr and Ms Shields also own Lissadell, 9 Shrewsbury Road, which is the largest completed home on Dublin’s most expensive residential street, although larger homes are under construction. Originally a sizeable Edwardian, the house was acquired by Ms Shields in 2012 for €6 million and supersized to 1,096sq m (11,797sq ft) following a seven-figure renovation and extension programme over two years. The lavish house features every conceivable amenity and is decorated in a tasteful period style.

Ms Shields also acquired 35 Mespil Road in Ballsbridge, once home to songwriter Percy French, for €1.1 million in 2013, and has refurbished and extended it.

Martin Shields (39), who is described as a hedge fund manager and investment banker in various company filings, is a director of Pembroke Partners (formerly D4P Holdings), a Gibraltar-based company that acquired the former Cablelink site beside Herbert Park in 2013 for reportedly just over €3 million – a huge reduction from its €27 million peak value. It is not known if he is the sole shareholder or funder of the company.

The site was later flipped on to the McSharry and Kennedy building families, who own the adjacent Herbert Park Hotel. Companies associated with the two families have since acquired adjoining period houses at 36 and 38 Herbert Park for €6.2 million.

Now neighbouring 40 Herbert Park is for sale asking €2.8 million, and the Block is prepared to bet they will be first in line to buy once again in order to maximise their site, on which they have previously sought permission to build a mixed-use development.

The darker side to Dublin’s history
8