From the Wild Atlantic Way to Dublin city centre, the importance of landscape architecture in establishing a better – and greener – quality of life is just beginning to be understood 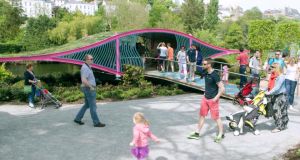 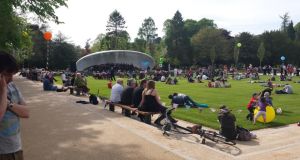 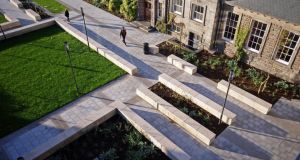 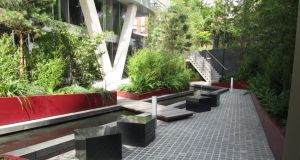 Much overlooked and underfinanced since the foundation of the State, landscape architecture may finally have taken its due place on the podium of Irish-built design. It has come a long way since the tar-and-cement days of the 1960s, a progression capped by a momentous 2015.

Landscape architects were part of the built design group set up by the organisers of Irish Design 2015. More importantly, last July the Department of Arts, Heritage and the Gaeltacht published Ireland’s first National Landscape Strategy (2015-2025), as part of its ratification of the Council of Europe’s 2004 European Landscape Convention, which obliges Ireland to implement policy changes for the protection, management and planning of the landscape.

Relating to natural, rural, urban and peri-urban areas, the strategy recognises the crucial importance of all landscapes to our quality of life.

Landscape architects are not moonlighting or grandiosely titled garden designers; they have the same professional connection with “landscapers” as architects do with builders. An interdisciplinary rather than multidisciplinary field, it can incorporate varying degrees of horticulture, architecture, planning, urban design, industrial design, soil science, ecology and the fine arts. So, with just 85 full members of the Irish Landscape Institute (ILI), why aren’t there more of them?

“I think a big problem with the profession is its name,” says Deirdre Black, director of Deirdre Black Associates and a visiting lecturer at University College Cork. “Landscape and architecture are two very loaded words, and when you put them together they jar for most people, unless they have come across the profession directly. I find it’s easier for people if I just explain the kind of projects I work on.

“For example, this year I’ve been working on a major off-road cycling strategy that uses public land to create a cycling network linking towns, villages, schools and tourist destinations. So you really need to understand how landscape works.”

Further evidence of the increasing recognition of the profession is in the tourist industry’s shift to destination planning, which is less focused on particular products or landmarks and more on the enriching experience of visiting a desired location and of becoming orientated to it. This means that landscape architects can work with the existing landscape to enable more pleasurable, meaningful experiences (as in, for example, the user facilities at the 188 discovery points along the Wild Atlantic Way), rather than trying to create something from scratch.

“People often talk in this country about the lack of joined-up thinking, but, by its very definition, landscape architecture is joined-up thinking,” says Black. “That’s how we are trained, and we are very good at encouraging other people to also work in that interdisciplinary way.”

“We are plagued with the ‘landscaping’ word, which usually means a few shrubs and plants,” says Tony Williams, head of the International Federation of Landscape Architects (Ifla) Europe, former president of the Irish Landscape Institute (ILI), and senior landscape architect at Transport Infrastructure Ireland (TII). “Landscape architects are involved in local, regional and global projects through Ifla. Through these projects we hope to influence the response to challenges and opportunities presented by climate change, for example, or other issues facing landscape management at all scales.

“For example, issues relating to the recent flooding in Ireland would be something we, as a discipline, would be uniquely qualified to deal with.”

Like Black, he praises the landscape architecture involved in the regeneration of Dublin’s O’Connell Street, but he says some of the best examples of the profession in Europe are found in the Nordic countries and Germany.

“That’s where our discipline is involved at all stages,” he says. “Projects with a landscape component are not undertaken without our involvement, as it’s a legal and contractual requirement.”

But look deeper and the rise of landscape architecture in Ireland is in fact a renaissance, albeit with a 21st-century twist. How else do you explain the marvels of Phoenix Park or the Georgian wonders of St Stephen’s Green or Merrion Square? While it takes just a fleeting visit to Powerscourt Estate – or to a phalanx of other 18th- and 19th-century Irish demesnes – to see the precedents for brilliance in landscape design, it can also be observed all around us.

“Landscape architecture matters because it’s everywhere, whether well or badly appreciated, managed or designed,” says Alan Mee of Alan Mee Architects, director of the urban design masters programme at University College Dublin and a judge at last year’s ILI’s awards. “I’m like lots of Irish people who have connections that are to both rural and urban landscapes, and the rapid change in how they look and work in the last few decades has been disturbing to many, exciting to some, but noticeable by all.

“Planning requirements necessitate you to have landscape architects attached to a development up to and beyond completion. Along with the rising standard of care and design in both rural and urban landscape commissions, the role of the properly qualified landscape architect is beginning to be understood,” says Mee.

Since 2008, Ali Grehan has been the very public and popular city architect at Dublin City Council. It was her experience of working with “really good landscape architects” on the Luas design project in the late 1990s, and later with Ballymun Regeneration, that convinced her of the value landscape architects can offer.

“They have expertise in areas that we don’t have; it’s a simple matter of knowledge, expertise and experience,” she says. “If Dublin is going to densify, with more people living well and closer to the city centre, then public space and landscape architecture will be critical. I think we are only beginning to understand that.”

A veteran of well-intentioned but often “difficult, messy and bruising” collaborations between built-design professionals, Grehan says that successful landscape architecture requires making strategic landscape decisions early enough in the design process to get them into the budget, the specifications and the building contracts.

“We have to bring the sense of a high-quality, green public realm into design principles for every development, and overall in the city centre,” Grehan says. “If we don’t do that, we will see density compromise, one that will equate to a poorer standard of city with a compromised quality of life.

“Greenification and densification go hand in hand; that is fundamental. Furthermore, we deserve it. We need to accept the leafy suburb as a truism, and challenge it by asking why we aren’t making sure that the poorest and most populated parts of the city are also very green.”

The green effect : Architecture and gardens

O’Connell Street Redesign, by Mitchell + Associates Aside from radically improving the pedestrian experience, and thereby returning the capital’s main street to its citizens, the clever, consistent and tasteful paving and tree-planting scheme in O’Connell Street, along with the removal of mature plane trees that divided an already divided thoroughfare, has helped to create a cohesive, coherent and democratic public space at the very heart of Dublin. See mitchell.ie/projects