Character cottages are rare, but bargains can still be found 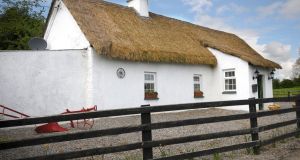 Situated in the heart of the sunny southeast, Wexford has long been a summer home from home, for Dubliners in particular. If there’s a downside, it’s that everybody wants the same thing.

“Most in demand of all are old cottages but they are as rare as hens’ teeth,” says David Quinn of Quinn Property in Gorey. “When they do come up they move very quickly. We get a phone call a day asking about them. The problem is that many were snapped up during the boom and redeveloped and they’ve been scarce ever since.”

“That does depend very much on what has been done to them,” says Quinn. “Those that have retained their old character see strongest demand. Those which were redeveloped to include big extensions at the rear, for example, fare less well because in those cases, and for those prices, people reckon they’d be better off going for a completely new house. It has to have character.”

With enormous, often tax-driven development having taken place along the coast from Courtown south throughout the boom years, it’s worth noting that some developments originally built as holiday homes are now lived in on a permanent basis.

There are still bargains to be had, however. A two-bedroom bungalow at Riverchapel, near Courtown, is for sale for €70,000 from DNG Pierce Properties. Sherry Fitzgerald O’Leary has a three-bedroom bungalow at Ballyconnigar, a few hundred metres from the sea close to Blackwater for €190,000.

If you’re prepared to forsake the coast, the further inland you go the cheaper the price.

“Pretty cottages, when they do come on the market here, tend to sell for around €180,000,” says Anne Carton of PN O’Gorman in New Ross.

“But if you’re prepared to move six or seven miles inland, you can get a three- to four-bedroomed bungalow for the same price, which offers really good value.”

If it’s the beach or naught however, Osborne House, a traditional four-bedroom, two-storey house in Rosslare might fit the bill. On the market through REA McCormack Corish, which is asking €195,000, it’s right on Strand Road, close to Rosslare Golf Club and within walking distance of Kelly’s Hotel.