Upstairs, downstairs in Killiney for €2.95m

Tudor Lodge is a detached, five-bedroom Victorian property with vast spaces for entertaining, a self-contained flat and an imposing staircase at the heart of the home 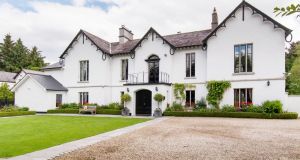 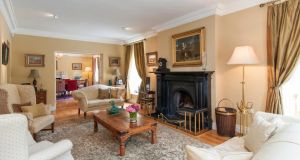 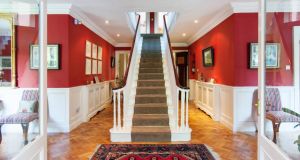 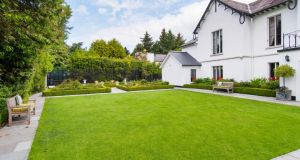 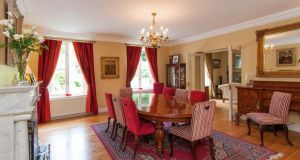 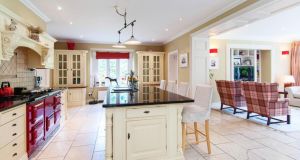 Just off Church Road in Killiney, Tudor Lodge is a house that has been, quite literally, turned upside down. We’re standing outside in the sunshine on the lawn beside the rose garden. Pointing out the central balcony above the front door, the owner tells me how, when it was originally built in the 1880s, this was the grand entrance. You went upstairs, to go in, while the servants slept downstairs.

“It was built as a dower house,” she says, “and next door was its coach house”. Today, Violet Hill is a little more built up, though you don’t get a sense of crowding, just a nice community of neighbours behind their electric gates off the quiet lane.

It was the previous owners who turned things around at Tudor Lodge, adding a very grand central staircase and moving all the bedrooms upstairs. You can still see the row of original servants bells above what is now the main front door.

They upgraded the place to an exceptionally high level, and while the huge kitchen is on the ground floor, they did like to use the large landing area for elaborate dinners.

“When we moved in, we’d hear lots of stories of the parties that had gone on here. Though we’ve had plenty of our own, from communions to 40ths to 80ths. We can’t always get the guests to go home – that’s a compliment,” the owner says.

They bought the house in 2004, through Sherry FitzGerald, for €2.775 million, and added an additional section to one side that includes a play room, and a guest/au pair flat, with its own separate access, above. This has a bedroom, bathroom and livingroom with kitchenette. It brings the total size to 597sq m (6,426sq ft), and now that they are moving nearby to start on a fixer-upper project, the house is on the market with Lisney for €2.95 million.

Beyond that imposing staircase, rising from a highly polished parquet floor, there is a wood-panelled study and cloakroom to the right, while to the left there is a country-style kitchen including Aga, leading to a breakfast room and utility room. Then, round to the play room, and along the garden side of the house to the dining room and formal lounge in an easy flow.

Upstairs there’s that landing where you could quite easily choose to entertain on a lavish scale – though there’s no problem doing that downstairs either. This gives access to the five bedrooms, four of which are en suite. The master also has a large dressing room. There’s a big sunny balcony to the rear of the house up here, and a smaller one at the front, which was, of course, once the front porch.

Outside, the owners dug back to create more garden space, using some of the granite to make steps up to a final evening suntrap patio. There is also a kitchen garden, fruit trees, lawn and play area with sunken trampoline.

“I do love living here,” the owner says, “and it’s completely ready to walk into.” However, it’s clear her mind is already on their new project – just down the road.