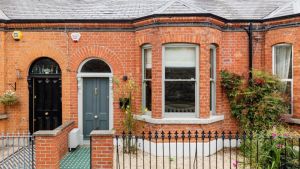 Covid-19 has forced lots of people living in the capital to re-evaluate their lifestyle priorities. This is especially true for people from the country who acutely felt the distance from family and loved ones during lockdown. Two sets of owners on the same road in north Dublin’s Drumcondra have made the decision to move out of the city as a result of the pandemic.

The owners of 10 Dargle Road are one such couple. When they bought the property, paying €450,000 for the 90sq m/968sq ft house in October 2018, they threw themselves into its refurbishment as a long-term home, but the recent lockdown has shifted their focus back to the country. “We always knew this was something we wanted to do but are probably just doing it a lot sooner. Covid brought the decision on,” they say.

At the time the villa-style terraced house needed everything doing to it. “We had been looking for two years for a turnkey home and struggled. We stumbled across the house and decided to take on the project because we wanted something with charm and a redbrick facade. We loved the road as there were only houses on one side, meaning it’s very quiet with ample parking.”

So the accountant and IT worker took on a project, and did a lot of the work themselves to save costs. This included including stripping everything back, the kitchen, the radiators and the bathrooms. The property was sold as seen, including its furniture, some of which they sold on to help pay for tools and offset a couple of other costs.

A friend drafted plans and drawings for their contractor but they could only afford to get it to a builder’s finish. “When we finally got the keys back all we had was a shell. I think that was the hard part as we were renting at the same time. We had to work tirelessly to get into the house in time. While we hired trade people for the big jobs we had help from family for other things, like laying slabs in the garden, painting and paving.”

The rear of the house was designed to be more broken than open plan to retain some privacy, and the back room has been incorporated into a large L-shaped kitchen to give a livingroom with a clever internal courtyard ensuring it gets lots of natural light. A large window seat has been boxed into this design.

The units and anthracite grey quartz countertops are by Kube and the room opens out to a north-facing back yard with pedestrian rear access via a gated lane.

Upstairs there is a double bedroom on the return while the main bedroom is up a half flight of stairs. It includes a walk-in wardrobe and shower en suite fitted into the generous attic space and accessed via a set of steps.

The family bathroom is at the very top of the house and is big enough to fit a double-ended bath and separate shower stall.

With a very respectable B2 BER and running to 112sq m /1,205sq ft, this is now exactly the kind of sleekly designed home the couple would have loved to have purchased in the first place. The house is seeking €645,000 through agent Sherry FitzGerald.

Meanwhile, just a few doors down, the owners of number 3 Dargle Road have also decided to move.

When theybought the house in April 2017 for €397,500 they say it was a doer-upper with good bones. They took on an engineer and an architect technician to reimagine the space. The engineer, Frank Enright, who has since passed away, had lived in the area and had a passion for period homes, they explain.

It was his suggestion to step the lofty ceiling in the livingroom and to use the 30cm of space gleaned from dropping it marginally to install a loft room above it. It has been elegantly realised and still leaves the original 2.7m headroom by the plantation-shuttered window.

The rest of the house is split. Down a level is the open plan livingroom, washed in a blush Berries and Cream by Fleetwood, which looks across at an eat-in kitchen where a wall of west-facing glazing brings light into the north-facing space. The white gloss Ikea units also help bounce light in. The yard has been landscaped by Cityscape Garden Design and has gate access to a pedestrian lane to the rear.

The first bedroom is off the livingroom. Its walls are covered in a graphic black and white paper while wardrobes are painted in Charlotte’s Locks, Farrow & Ball’s bold shade of burned orange.

Upstairs the family bathroom is on the return – there is also a guest toilet under the stairs – with the main bedroom also on this level. At the top of the house is a smart attic room with good ceiling height and a north-facing roof light.

The owners are departing the city to be closer to relatives. “It’s been a tough decision because this has been our first family home. We hadn’t planned to move but Covid-19 has been the driver. We had lost the link with family, and there is a sense of pure joy at being able to be near them again.”

The house has new electrics, plumbing, reinstated fireplaces and a B3 BER. Measuring 95sq m/1,022sq ft it is seeking €545,000 through agent Moovingo.

What will €900k buy you in Greystones, the US, Italy, France and Portugal?
9