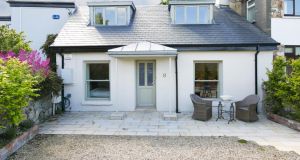 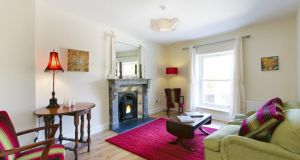 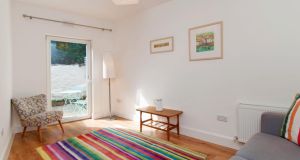 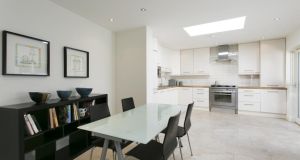 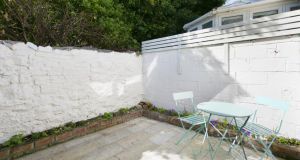 Leslie Avenue in Dalkey takes its name from Charles Leslie, a wealthy chemist who lived at nearby Carrig-na-Gréine. Leslie famously constructed the Dalkey Tunnels on his land so the public could access the water at Lady Well without him having to observe the general populace traipsing across his land.

A mix of cottages on the avenue was constructed by Leslie as gifts for his farmhands and for the quarrymen working at Dalkey quarry. Many of these labourers’ cottages have been upgraded and transformed into modern homes. One such is number eight, which started life almost two centuries ago at half its current size.

Inside the deceptive exterior is a home set over two floors with swish modern interiors. The only real indication that this is a period property is the antique fireplace in the living room.

Lots of windows, patio doors and Velux windows were installed during the renovations, which flood the entire house with light. The use of wide corridors, pale flooring and neutral colours helps to emphasise the space throughout.

To the rear lies a large kitchen- cum-dining room complete with a range and walnut countertops, which leads to a small granite courtyard.

The house has three bedrooms with an option of a fourth in a box room currently used as an office, and two living rooms, the larger of which lies to the front overlooking a modern patio in granite.

Small details, such as the sage- coloured Aru sash windows and period fireplace, serve as reminder that this is an old house; but with electric gates, high-tech security system, contemporary interiors and 126sq m of living space it’s a long way from the cottage it once was. Available through Sherry FitzGerald, asking €775,000.