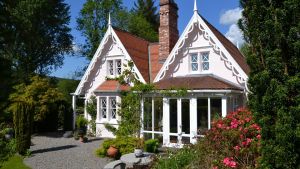 In a recent interview, U2 singer Bono clarified a comment about everyone being in the same boat during the current coronavirus crisis, by likening the experience more to a storm where everyone is weathering it out in very different boats. If you could design the ideal pandemic bolthole it probably wouldn’t be too far off Greenhall Lodge in Tinahely.

Set deep in south Co Wicklow, this charming hideaway on the banks of the River Derry originally served as a hunting lodge for Earl Fitzwilliam in the late 19th century at the northerly tip of his sprawling Coolattin Estate. It remained within the hands of the estate well into the 20th century, though its use changed over time. At the turn of the 20th century it became the “women’s hunting lodge” for the Shillelagh Hunt – a place where the women members could change before taking to the surrounding hills, and where the gate at the front of the property was a key feature of the course to be cleared on horseback.

When the current owner, Stephen O’Mara, purchased Greenhall Lodge at the turn of this century, he says it was the easiest decision he and his partner, Mary, ever made. Living in Sandycove from the 1970s, the couple wanted a change in their lives and to start afresh within easy reach of Dublin.

“The first day we started looking in earnest we saw it advertised in The Irish Times and that was it, it was love at first sight. Luckily it worked out and became ours.”

While the lodge’s charm overlooking a 1.3-acre sweep of stunning gardens was beguiling, O’Mara says there was plenty of work to be done. Cold, damp and dark were prioritised as three areas to tackle. After moving in initially they worked with a local architect on a new design, then rented a nearby farmhouse for nine months while the work was completed. A sun room and bathroom were added to the rear in a move which effectively joined the double A-frame design. Walls were dry-fitted, a skylight was introduced above the stairs to flood light into the interior, and the distinctive X-shaped windows were restored – the original single glazing was retained and double-glazed panels added inside.

Today the house extends to 186sq m (1,998sq ft) and it has been re-roofed, re-plumbed and rewired. Power showers, a new oil burner and a water well have been added.

A one-time art dealer, O’Mara is a specialist in the work of Patrick Swift, an Irish artist and contemporary of Lucian Freud in London in the 1950s, who died in Portugal in 1983. The  artworks and aesthetic touches add greatly to the country cottage charm.

With just three bedrooms, the accommodation is modest but more than sufficient for the owners. In non-Covid-19 times Mary remains in Dublin during the week for work, returning to Wicklow at weekends, while Stephen might visit Dublin once a week. “It’s why we picked the location, because it’s proximate enough to come and go to the city quite easily.”

Beyond the low timber gate at the entrance, the gravel path leads Anne-of-Green-Gables style to the classic Victorian entrance with its scalloped wood trim. Opening into the family room, the atmospheric tone is set with a feature marble fireplace, polished timber flooring and a large bay window overlooking the gardens and river. Two heavy double doors lead in turn to a study, with fireplace, timber-panelled ceiling and fitted book cases.

From a small stair hall a timber winding staircase leads to the first floor, where the diningroom and kitchen are located. The diningroom has a fine cast-iron fireplace and timber floors and links through open arches to both the kitchen and sun room. The compact kitchen is very much function-oriented with integrated appliances, granite worktops and slate stone flooring.

French windows link the sun room to the rambling garden off a sunny stone terrace. There’s a boot room and bedroom with en suite shower also on this floor.

On the top floor the main bedroom suite runs the entire width of the house and includes a generous bathroom, dressing room and shower room. Located in the eaves with polished timber floors, it’s a cosy escape with lovely garden views. A second bedroom – also with prized garden views – and a family bathroom complete the first floor.

The enchanting gardens at Greenhall are likely to be what will sell it. When the O’Maras first came it took them 45 minutes with a hack knife to beat their way to the bottom of the garden where they found an island in the middle of a stream. Since then, Stephen says he set up his own garden centre with the sole aim of covering the grounds in greenery and grew 15,000 plants in the shelter of a mature white rhododendron.

“I’m a botanist and it was a labour of love. My goal was to make it almost entirely labour-free as I knew I wouldn’t be able to cope with a garden of this size, nor could I afford a gardener to tend to it. This year, for example, all I did was put in two areas of bark, but every year it becomes more splendid.”

There are 27 maples at various stages of maturity, half a dozen laburnum, and countless trees and shrubs, with gravelled paths linking the lawned areas, and a delicate gazebo echoing the X-shaped windows of the lodge. The riverside idyll is completed by an 18th-century granite bridge in the background.

Directly across the river are the ancient oaks and many walking trails within Tomnafinnogue Woods, and wildlife is plentiful.

“It has been a godsend during Covid-19. The peace and quiet here is wonderful, without being too lonely. You can hear the occasional passing traffic in the distance. Tinahely is just a short hop, and there’s Gorey for the occasional big shop. We have the most glorious oak forest literally next door which is truly fabulous.”

Stephen and Mary are heading back to Sandycove to the refurbished coach house of their original property – or the “dog house” as Stephen calls it, as this was its primary function before they headed for the Wicklow hills.

Now 20 years on from its last revamp and with a BER of D2, its likely new owners will want to make their own upgrades at Greenhall Lodge, but the basic template is idyllic. It is for sale seeking €550,000 through joint agents Ireland Sotheby’s International Realty and Warren Estates.