Two-bedroom home has been fully renovated since 2018 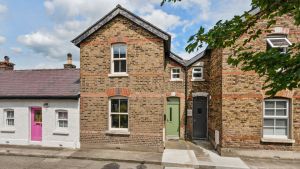 Cormac Terrace is a pair of tiny culs-de-sac opening west off Rathfarnham Road and about three minutes’ walk from Terenure village. Mostly made up of single-storey cottages, there are four two-storey houses at the entrance to one of the terraces, built in 1890.

The young couple who bought then did just that – gutting the house with a long to-do list that started at the front with new windows and front door through to the smart new kitchen units to the rear.

They didn’t change the footprint – though altered the downstairs layout. It was originally made of two tiny reception rooms with a hall leading to the rear kitchen. Now the living accommodation is essentially one room opening into a kitchen to the rear fitted with glossy grey units topped with quartz. A wall of cupboards provides good storage.

The ceilings are higher than usual – something that’s clear from the mellow brick exterior which features a tall sash window – improving the sense of space. A contemporary gas fire has been inset into the wall. The flooring is herringbone timber in the living area, large tile in the kitchen – stylishly consistent with the smart interior choices.

A bespoke black framed glazed door opens into a tiny patio, with the benefit of rear access so handy for bins and bicycles. A shed doubles as a utility room – removing the washing machine from the kitchen always a boon in a small house.

Upstairs – the staircase is nicely panelled and painted grey – there are two double bedrooms and a shower room.

Viewers so far have been mostly first-time buyers, drawn by the location and the finish of the property which now requires no work, not even a paint job, possibly weighing up this purchase by comparing it with a two-bedroom apartment in the well-serviced neighbourhood. Parking is on-street in the cul-de-sac.