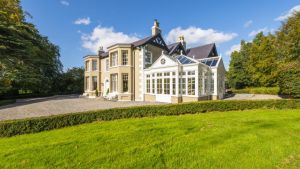 They say that racing began on The Curragh before Saint Patrick ever set foot on our soil. Records show the High Kings having the craic with chariots two thousand years ago.

Horse racing came later, but Co Kildare is definitely known as the spiritual home of the thoroughbred. And Crotanstown House has been at the heart of horseracing for centuries.

Originally one of a series of hunting lodges, scattered about the plains of The Curragh, Crotanstown, which sits on around 3 hectares (8 acres), was once home of Thomas “Buck” Whaley.

He was a member of the Irish House of Parliament back in the 1700s, and once went from Dublin to Jerusalem for a bet. He also attempted to rescue Louis XVI from the guillotine, and squandered a fortune by not being that great at gambling.

The house, however, is well worth a punt, or €1.85million to be exact. This is its asking price through Savills, and in more recent years it has been the home of multiple winners of the four-legged variety.

In the hands of Sir Henry Greer, who introduced the Aga Khan III to racing, and later with trainer JT Rogers, and then David Ainsworth, the adjacent stud farm (included in the sale) sent out Classic winners to the four corners of Ireland. Aidan O’Brien worked here, and currently in occupation, Michael O’Callaghan has kept the winning streak going.

O’Callaghan leases the equine facilities at Crotanstown, which last changed hands in 2008 for €2.7 million at auction (through Colliers Jackson Stops and Jordan Auctioneers). New owners can choose whether to continue the lease, or take up training on their own behalf.

The house is already vacant, the owners having moved on to new pastures. What they’ll get is a seven bedroom, graceful Victorian house – added to over the years since Whaley was having a whale of a time here – with a separate three bedroom cottage.

The main house has all the formal rooms you’d want, including a music room, drawing room, garden room, snooker room – the list goes on. In all the main house has 805 sq m (8,664 sq ft) of space, with the cottage adding a further 125 sq m (1,345 sq ft). The horses have it very palatial too, with 40 stables, lunging ring, Dutch barn, sand arena, and paddocks. These can all be accessed via a separate entrance.

James Butler, who is looking after the sale for Savills, says a key attraction of the property is the setting and the view, “you’re looking out over The Curragh, and just a couple of minutes to the M9 – and the racecourse,” he adds.

Non equine nature lovers will enjoy the orchard, tennis court, mature planting, pond and gardens laid out around the house. There’s also a former swimming pool in need of a refurb, should you fancy taking the plunge.

Image caption: Crotanstown House and Stud, seven bedroom house, with cottage and stabling for forty horses, on eight acres, for sale with Savills for €1.85 million.