Some things old, some things new at Sandycove Victorian for €2.1m 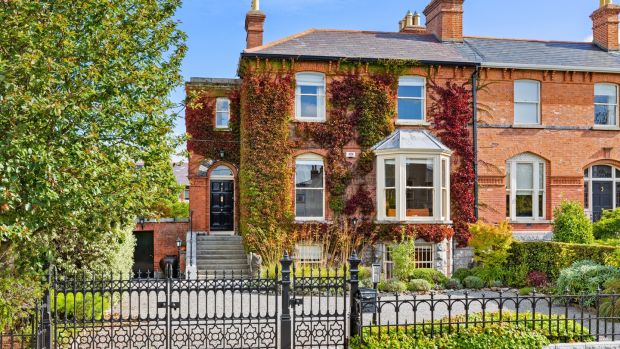 A large end-of-terrace redbrick on 0.2 of an acre in Sandycove, south Co Dublin, is a handsome family home that was refreshed for a family wedding this summer. With limits put on numbers by the lockdown, the house and back garden were easily big enough to host the wedding ceremony and reception afterwards.

Now number 4 Elton Park is for sale for €2.1 million through Sherry FitzGerald.

The 256sq m (2,756sq ft) end-of-terrace listed house, built in the 1870s, is furnished in traditional style, with large rugs on stripped and polished original floorboards, prints and artwork everywhere as well as hints of the owners’ travels in both house and garden.

The couple bought the four-bed more than 20 years ago but lived abroad for many years, and it’s apparent in the stone Buddhas in the garden, other statuary and in the downstairs livingroom, an ornate wooden coffee table made from a door from Oman.

Like other houses on Elton Park, one of the widest streets in Sandycove, the house stands well back from the road behind Victorian railings. The front door opens into a large hall which, like most of the rooms in the house, has high ceilings and original coving.

It’s bright, with a large window halfway up the stairs. On the right are the interconnecting drawingroom, diningroom and library. The cosy library opens into the large drawingroom which has a pale marble fireplace and a large bay window overlooking the front. The diningroom has a black marble fireplace, the same elaborate ceiling coving, 11ft high ceilings and two large windows overlooking the back garden.

The kitchen is at garden level downstairs off a wide hall floored with terracotta tiles. It has Shaker-style timber units, Corian countertops, a cream gas-fired Aga set into a brick fireplace, and ceramic-tiled floor. It opens into a timber-floored sittingroom with a large cast-iron fireplace at the front of the house; French doors at the back open from the kitchen into the garden.

There’s a fourth bedroom/study at this level, a shower room and planning permission to extend the utility room at the back by 6.5sq m (70sq ft). There’s also room for storage and a wine cellar under the exposed-stone front stairs. After moving in, the owners dug down at garden level, put in dry lining and a BRE electronic damp system – “and we’ve never had a damp day”, they say.

Upstairs, the large main bedroom at the front looks towards Killiney Hill. Off it is a dressingroom leading into a smart, tiled ensuite shower room. There are two more double bedrooms at this level – all have fitted wardrobes – and a family bathroom.

The rear garden, sheltered by stone walls, is particularly attractive: a semi-circular patio graced by a Buddha leads onto a lawn beside which is another patio under a pergola covered with climbing roses.

On the opposite side is a pond surrounded by mature shrubs while steps across the lawn lead to a sunken patio at the bottom of the garden. There’s another sunken patio at the front of the house, next to large, gravelled front garden with plenty of space for parking.