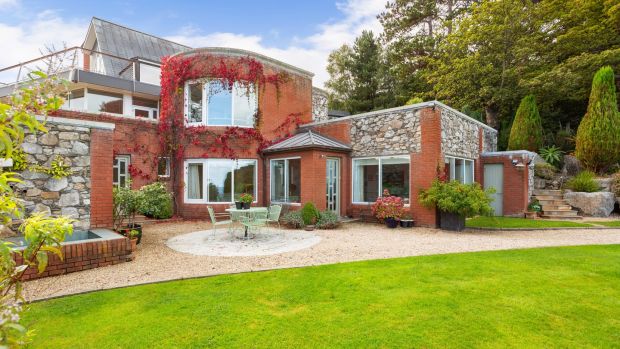 Architecture students will know Villa Maria in Killiney, Co Dublin, because many are brought there as part of their training. The house was designed in 1954 by Irish architect Jack O’Hare, who apprenticed himself to Frank Lloyd Wright. He spent a year working with the legendary American architect in the 1940s and brought some of his thinking home to Ireland, most notably in this house. His colourful drawings for the striking house are in the Irish Architectural Archive.

And while it would be nice to think that appreciation of mid-century modern design accounts for the €5 million price tag on Villa Maria, it’s not that; it’s the spectacular elevated site. The 485sq m (5,220sq ft) house (with 58sq m (624sq ft) mews) is built on three levels with unimpeded panoramic views, from windows and terraces, of Killiney bay from Dalkey to Bray, and to the obelisk on Killiney Hill.

For buyers in this price range who tend to put a premium on privacy, it has that too, as it is accessed off a short cul-de-sac off Killiney Hill Road, and set behind tall gates in tall Victorian pillars. The house is set on 1.3 acres of sea-facing grounds, maintained weekly and designed by landscape architect Robert Carson, who was brought in by the current owners to fully integrate the house and gardens.

They bought 30 years ago when the house was in need of renovation. Planning stipulations rightly demanded that the design should be respected and so one of the tasks was to source a replacement copper roof – for the bridge section to the rear that houses five bedrooms – that could be treated to stop it turning green; it was shipped in from Australia. Reclaimed stone was sourced nearby, from Co Wicklow.

There are two large principal living rooms: the drawing room with wraparound picture windows to enjoy the exceptional views, and the kitchen-dining-living room with the unusual feature in the atrium ceiling of a Jasmine vine which blooms winter and summer. There are also two home offices: one to the rear, where you might actually get work done; and a round room to the front with those dreamy sea views. In addition, there is a gym, as well as family bathrooms, a comms room and a utility rooom, and all bedrooms are en suite.

There’s also guest accommodation in a one-bedroom self-contained apartment at the lower level, with its own terrace. The mews – a rental, now empty, and quite separate from the main house – is a two-bed with its own entrance from the road.

While the house has been redecorated over the years and upgrades by its owner include Lutron and Nest Smart Home technology, new owners will probably put in a new kitchen, redecorate, and update several of the en suites which are now 30 years in situ. It has a C2 BER rating and Sherry FitzGerald is the agent.