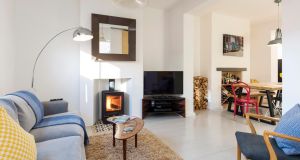 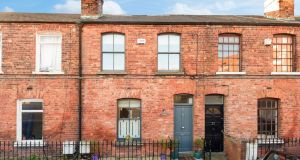 When number 21 Rehoboth Place appeared on RTE’s Home of the Year TV series last year, it was described by one of the judges, Hugh Wallace, as being “a bit too perfect”.

But in the current home-hunting market perfection is hard to find, so if you’re one of many busy would-be buyers that don’t want to renovate a property then this one, in walk-in condition, may be just the ticket.

Two years ago the owners, Eric Dunne and Conor Hudson, paid €360,000 for number 21, according to the property price register. The pair, who have an eye for interiors, set about installing new bathrooms and a kitchen and once all the structural refurbishment was done the accountant and sales rep focused on the décor. The result is a smart, bright, contemporary interior with 90sq m (975sq ft) which is seeking €545,000 through agent Sherry FitzGerald.

The house opens directly into the open-plan ground floor. A door from the hall has been removed, so you can see from the front to the rear the property. The floorboards throughout have been painted a pale grey to create a sense of flow starting with the sittingroom, overlooking the street but shielded from prying eyes by cool, half-height, privacy shutters by kitchen and furniture designer Damien Dowd. A wood-burning stove completes the cosy feel. The yellow tiles surrounding its hearth were picked up in Barcelona on a city break.

This leads through to the diningroom, where the original second fireplace has been repurposed as a smart, open drinks cabinet, within easy reach of the table, made from reclaimed scaffolding planks.

To the rear and overlooking the southwest facing garden is a very manly kitchen of warm plywood topped with black Formica counters. From here large glazed doors open out to the decked and lawned south-facing garden. Secreted under the stairs is a decent size shower room.

The steps up to the first floor are probably steeper than anyone trading down would like but here there are two good-sized double bedrooms – each with headboards by Dowd. The master, to the front, runs the width of the house and has matching double wardrobes that Dowd completed to designs found by Eric on Pinterest.

The main bathroom is huge, has a Victorian-style toilet, a large shower stall and a checkerboard floor. The door architraves are painted in Farrow & Ball Downpipe, a liquorice shade.

The couple converted the attic into a light-filled mezzanine, accessed by a challenging steel-frame staircase by H&M Engineering. It leads to a low-ceiling 16sqm (175sq ft) space that offers a gorgeous escape from the open plan of the ground floor and a good place to install a study.

Parking is on street and Lowe’s pub is at the end of the street.

Work from home in a picture perfect Wicklow country garden for €1.35m
6

How to be happy in a time of uncertainty
7

Tell Me About It: ‘Why am I the one always left alone?’
8