Modern three-bed holiday home in Ballymacarbry, Waterford, is on one acre of land 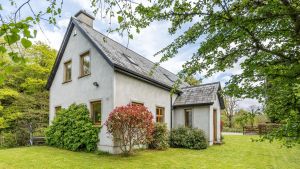 Pat O’Donnell and his wife Mary used to spend a lot of time on holidays in the Nire Valley, a part of Co Waterford near the border with Co Tipperary. One night in a pub he asked whether any sites were available – and four days later, they bought an acre of land running down to the river Nire.

The couple built their holiday home, Nire Valley River Cottage, there in 2002. But they now live full time in a fairly similar rural area near Gorey, Co Wexford, and for the past three years have been renting out the cottage.

Now they’re selling Nire Valley River Cottage in Ballymacarbry, a modern three-bedroom detached house on one acre through Sherry FitzGerald Power & Walsh for €275,000. Generating a short let rental income in 2016, the cottage was let for 30 weeks, providing a turnover of about €12,000, says O’Donnell.

The cottage is an oasis of calm less than a mile down the road from Ballymacrbry, a tiny – two pubs, one shop – very pretty village in the Nire Valley between Clonmel and Dungarvan.

From a deck that runs the width at the back of the house, O’Donnell says all riverside wildlife is on view – otters, deer, kingfishers zooming up and down. And there’s kayaking and fishing at the bottom of the garden too.

Accommodation downstairs consists of a largely open-plan kitchen/diningroom, livingroom and a bedroom that could be a home office.

The kitchen has a quarry-tiled floor, pine units and a patio door opening on to the riverside deck. The carpeted livingroom has a solid fuel stove. There’s room for utilities in a side passage, and a downstairs bathroom with a shower.

Upstairs are two bedrooms, one en-suite and a family bathroom. The house is surrounded by lawn. It has oil-fired central heating and double-glazed windows.

The area is well known for its walking trails in the Comeragh, Knockmealdown and Galtee mountains. Nire Valley River Cottage is near lots of golf clubs, on the Sean Kelly Cycling Route, and there are several upmarket restaurants nearby.

We’ve got new lockdown rituals, but man, I miss the old ones
9

How to start an Irish art collection on a budget
10