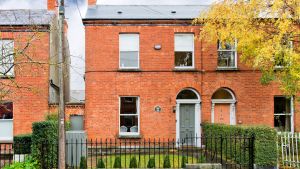 A circular plaque on the wall of 54 Beechwood Avenue Upper, in Ranelagh, commemorates two prominent Irishmen.

Douglas Gageby – who died at the age of 85 in 2004 – was born at this end-of-terrace Victorian house in 1918.  He was editor of The Irish Times for a total of 22 years, including during the worst years of violence in Northern Ireland.

The influential editor was once described by the late John Hume as “one of the greatest and most positive and influential Irishmen in this century”, adding that “undoubtedly Douglas helped prepare the intellectual ground that eventually led to the ceasefires, the talks and the Good Friday agreement”.

Gageby’s grandfather Robert stood as a Labour Party candidate in Belfast in 1910, having been first elected in 1898 as a trade union candidate. This property, where Gageby was born, at a later date became home briefly to Jim Larkin, one of the founders of the Irish Labour Party and the Irish Transport and General Workers Union, which merged with the Federated Workers’ Union of Ireland to become Siptu.

Catherine, whose online business parkadays.com – selling sheepskin slippers – has “been booming with the lockdowns”, was very familiar with the house that became their family home. Her father grew up in the house next door. “I spent so many Christmases and St Patrick’s Days in number 55, and so many of the neighbours here still remember my dad.”

When they bought the 130sq m (1,400sq ft) house in 2017 it needed quite a bit of work. “It was in three units and was really higgledy-piggledy. There was a kitchen sink in the main bedroom, and three bits of rooms tacked on to the back,” recalls Charlie.

The couple engaged a builder and, with the help of Donnybrook-based interior designer Cormac Rowell, totally transformed the property to what it is today: a lovely, light-filled three-bedroom home in turnkey condition.

Its layout is now returned to as it was when it was first constructed in the Victorian era, with two formal reception rooms at hall level, an eat-in galley-style kitchen to the rear and three fine bedrooms upstairs.

The good-sized rear garden currently has a patio, but it could do with more planting to do the space justice.

The couple are moving to be closer to family but will really miss the area.

“We are just minutes from the Luas and shops on Dunville Avenue and just a 20-minute walk from Grafton Street, and while it was a hard decision to move, we need to be closer to family,” says Charlie.

Their property is on the market through Sherry FitzGerald seeking €1.095 million.