Prominent car dealer’s Dalkey home on an acre of parkland for €2.95m 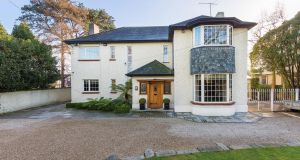 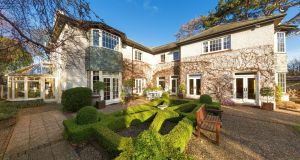 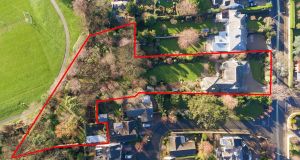 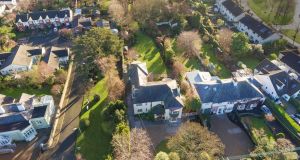 A detached six-bed on one acre, behind a high gate in Dalkey, has an unassuming enough front entrance – but the real surprise lies behind.

Richmond, 39 Castlepark Road, features a rear garden where a manicured lawn splays out towards the end into woodland and a walled garden where camellias and rhododendrons flourish. More like a small public park, the very private garden backs onto the grounds of Cuala GAA club.

Motor dealer Frank Keane – the man who introduced BMWs to Ireland in the 1960s – and his wife Ursula moved into Richmond 45 years ago. The 1930s house has been well-maintained over the intervening period.

They built a two-storey extension at the back 35 years ago and more recently upgraded the kitchen, bathrooms and replaced most windows with hardwood double-glazed versions of the originals. But now, with their three children long gone, it’s time to move on.

The 418sq m (4,500sq ft) house is now for sale for €2.95 million through Lisney. Agent Stephen Day says developers have expressed interest in the property but expects it will be bought as a family home. The house is on the corner of Castlepark Road and St Margaret’s Close, a small development built in the 1990s in the grounds of a Victorian house. There is no access to the Richmond site, bar knocking the house, which makes development unlikely.

Inside, the house is a large comfortable home, painted in vivid colours and furnished in rich period style. Bay windows have window seats; multi-paned French windows open off several rooms in the L-shaped back of the house onto a rear patio.

A wide terracotta-floored porch opens into the timber-floored front hall. The long formal drawingroom, painted salmon pink like the hall, opens at the right, running from the front to the back of the original house. A bay window with a window seat overlooks the front; French windows at the other end open onto the patio. A small sunroom added 10 years ago opens off the side of the room.

A formal dining room off the front hall is painted deep green, and a door from here opens into the kitchen/breakfastroom. A wide bright room with a terracotta-tiled floor, it has timber units, polished black marble countertops and a breakfast bar separating it from the breakfastroom. There’s a small utility room and a study beside it.

The house was extended from the kitchen: glazed doors open into a small hallway which opens at one side into the garden, at the other into a carport and straight ahead into the very large family room.

A large comfortable room painted yellow, it has a solid fuel stove set into beige marble fireplace with built-in bookshelves on either side, a window seat under the bay window and two sets of patio doors.

Upstairs, there are six bedrooms and a family bathroom with a green/black marble-tiled floor and bath surround and a shower. Two double bedrooms near the front of the house share a shower room; another bedroom is used as a home office. The main bedroom has dressing area off it lined with wardrobes leading to an en suite shower room installed 10 years ago. Like the family room below, it has a wide bay window overlooking the rear garden.

And what a garden . . . box hedging decorates the patio, from where the lawn stretches down to the wall separating it from Cuala’s grounds. A path leads past a teak shelter with a bench overlooking the lawn, and continues down past camellias and rhododendrons before splitting in two: one path curves sharp left, past a patio area with sheds that was once, apparently, a piggery and then into a large walled garden.

A gardener – one of several who tend to Richmond’s garden weekly – points out a scented Daphne shrub and pink flowering camellias flourishing in the protection of the walls. The garden path outside the walled garden leads into a woodland filled with very tall trees – a sequoia was planted here just 40 years ago – and come spring it will fill with bluebells says the gardener.

There’s parking for several cars in the large front garden.

Richmond is about halfway up Castlepark Road from the main Sandycove Road, almost opposite the turn into Dundela Park.