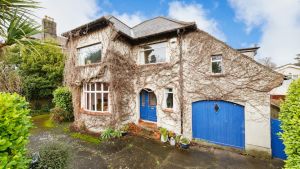 For many house-hunters, Blackrock is one of the most desirable areas in south Co Dublin.

The leafy suburb has become effortlessly cool – with its maritime setting and DART service to the city centre, it ticks quite a few boxes. The Blackrock Market which has now evolved into a home for quirky eateries, serves lockdown menus offering everything from proper fish and chips and seaweed salads to Michelin-starred gourmet deliveries. Add the list of private schools, tennis, rugby and sailing clubs into the mix, and you can understand the location’s popularity.

Glenart Avenue, a quiet road running parallel to Avoca Avenue – which is one of the most desirable areas to reside – has a mixture of house styles that range from old grande dames to modern high-end homes. An additional attraction here is not just proximity to the village but the size of some of the plots that these houses stand on.

Crossogs at number 32, has been in the same family for the past 60 years and is now on the market as an executor sale through Lisney seeking €1.5 million.

While that may appear a steep price for a 197sq m (2,120sq ft) property requiring total refurbishment – it has a new kitchen and bathroom but the rest of the house needs a serious upgrade – it is the 0.3 of an acre (0.12 hectare) site that is a real selling point.

So much so that it could have development potential, as was the case with Kinvara, a property purchased by veteran developer Richard Barrett of Bartra Capital in 2017 for €3.25 million. The half-acre site, which is just a few doors down from number 32, was replaced by four high-end family homes which sold for between €1.806 million and €2.05 million (excluding VAT) over the past two years.

Stephen Day of Lisney who is handling the sale suggests there is space – subject to planning – for two properties to be developed on the wide site: “But to be honest a site of this size is as rare as hen’s teeth in Blackrock, so it may well be destined to become a large luxury family home for an owner-occupier”.

It would take an estimated additional €400,000-€500,000 to transform this house into a sizeable luxurious home while still retaining a very large and private garden.

The video and photographs promoting the property don’t quite do justice to the extent of this site, which is somewhat overgrown and has a partial hedge running down the length of the rear garden.