No place like this Victorian Donnybrook home for €1.795m 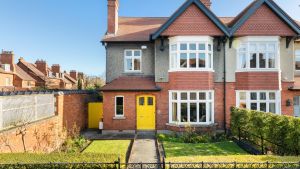 “Go East, Go West . . . Hames Best,” says a motto engraved in a colourful stained-glass window halfway up the staircase of a Crampton-built house in Donnybrook. The old Scottish proverb translates as the Victorian equivalent of “No place like home” and indeed this has been a happy place for a family who moved here in 1966 says one of the vendors, who was just an infant when her parents bought the house.

The house, built in the early years of the 20th century, has many of its original period features – fireplaces with pretty tiled surrounds, windows with leaded glass panels – but needs modernisation. The location, on a quiet street of redbricks near the Morehampton Road end of Herbert Park, in walking distance of the park and close to the city, is a big attraction.

Now the 212sq m (2,290sq ft) five-bed semi is for sale through Lisney for €1.795 million. New owners could spend about €200,000 to €300,000 to modernise, suggests agent Ciaran Cassidy – sorting out basics like wiring, plumbing, insulation – and probably extending and creating a modern new open-plan kitchen. But the house, which has gas-fired central heating, has been well-maintained and new owners could live there while carrying out the work, he believes.

A bright yellow front door opens into a tiled porch where a second door with an ornate stained-glass panel opens into a squarish front hall with parquet flooring and a mahogany fireplace. A drawingroom on the right with a wide bay window has an ornate white timber fireplace with pretty tiled surround and a polished brass hood.

The diningroom behind it has a mahogany mantelpiece with glossy green tiles and a copper hood. A small cupboard – a kind of drinks and delph cabinet – is set into the wall in a corner of the room. A door opens from here into the long rear garden.

Upstairs, there are four bedrooms and a separate bathroom and toilet on the first floor with a fifth attic bedroom on the top floor. The main bedroom at the front of the house has a bay window; next to it is a single bedroom which new owners might turn into an en suite-cum-walk-in dressingroom. Two bedrooms at the back, one with a white cast-iron fireplace, overlook gardens between Arranmore Road and Argyle Road.

There is plenty of room to extend either at the side or rear of the house in the 30m (100ft) long rear garden. There is a manicured lawn in the railed front garden, with residents’ permit on-street parking.