Family home with a sleek modern style on Ticknock Road 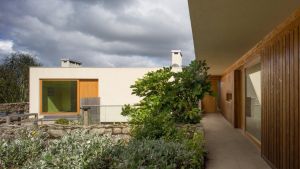 Deervale is 2.2km up the hill from Blackglen Road in Dublin 18, which means in light traffic it is just about 30 minutes from the heart of Dublin, and only 3.5km from the Luas at Sandyford – and yet it feels a whole world apart. “It doesn’t matter what kind of a day we’ve had,” the owner agrees. “We’d come home and it would be like we were on holiday.”

Designed by architect David Dwyer, the house sits into its sloping site in such a clever way that all sorts of surprises are revealed as you explore. The owners commissioned the build in 2004, having looked for what seemed like a lifetime for the perfect home. Then they came upon a detached bungalow in this incredible site. “We had intended to extend,” the owner says. “But then David showed us his plans and we had to go for it.”

The design process took a while. “David was absolutely brilliant, he kept adding ideas, and we couldn’t say no because they were all so good,” the owner remembers. The couple, and their then small children, moved into a converted stables on the site for the duration of the build. “I’d look at the house taking shape and I couldn’t believe it was going to be ours.”

Dwyer says the house was designed to maximise space, site and light, and the results are very special indeed. Go in to discover a large open-plan kitchen/breakfast area, which itself opens on to an expansive terrace overlooking the grounds and the mountains beyond.

“When we first moved in, it wasn’t fenced and deer came right up to the house,” the owner says. “I still sometimes stop on the way up, to let stags wander by.” Now that the 3½ acres are fenced, there’s a greenhouse, vegetable garden, paddock, chicken run, play area and pond, as well as those stables, which could easily be converted back.

Beyond the kitchen, there’s a den or play area and a side door to the covered car port. Meanwhile, in the main house, there are balconies and terraces everywhere, both internal and external. From the cosy but stylish lounge there’s a fabulous double-height entertainment room. An internal courtyard garden gives extra light.

There are five bedrooms, including a gorgeous master suite with a private terrace. The beds have been designed and built-in, so they’re included in the sale. There’s also clever and stylish storage designed by the architect throughout.

Beyond the utility room and studio (which once was vaguely intended as a gym), there’s a door to a large double-height semi-separate apartment, which can also be reached by a door beyond the car port. This offers lots of options for guests, an au-pair, grown-up children or even additional income. There’s 400sq m (4,305sq ft) of accommodation in all, and everything has been carefully styled and maintained – from the funky flock wallpaper in the guest room, to the bespoke walnut kitchen.

The owners are moving for a fresh challenge. “The perfect house hasn’t been built yet,” the owner says. “It’s a quest.” He might be right, but Deervale, which is for sale with Lisney for €1.5m, comes pretty close.