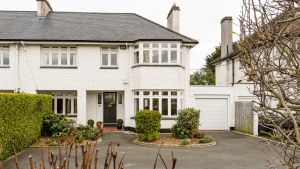 A classic 1930s Kenny-built house in Dublin’s Mount Merrion suburb has been a family home for 40 years. Over that time, the owners have made various adaptations to their Sycamore Road home – a new roof, double-glazed timber windows, wooden floors installed 20 years ago and a new kitchen about 16 years ago. Even still there’s further potential to renovate and extend the semi-detached house with a large garden: “A good architect could have a field day with it,” says one of the owners.

Now 16 Sycamore Road is for sale for €1.1 million through selling agent Knight Frank.

John Kenny was a 1930s property developer who, with his partner John Du Moulin, began to build what was described as a “Garden City”, similar to those being developed in England at the time: houses in Mount Merrion were advertised as “Dream Homes” with then-new mod cons such as electric lighting.

The 148sq m (1,593sq ft) four-bed has the low front walls and bay windows typical of Mount Merrion houses. The double-fronted house opens into a long, timber-floored hall. On the left is a living room running from the front to the rear of the house with a marble fireplace and a door opening into the back garden.

On the right of the hall is the dining room, with a wide bay window looking onto the front garden: it opens directly into the kitchen – the owner removed a dividing wall. The kitchen has a tiled floor, timber units and polished granite countertops and an island unit.

A door leads from the kitchen across a small hall – where there’s a downstairs toilet – into the garden room. A glazed door opens from here into the back garden.

Upstairs there are four bedrooms. The main bedroom has the same wide bay window as the diningroom below. There’s clear potential to extend the property above the garage to add a bathroom and maybe a walk-in dressing room.

There is also plenty of room to extend further into the long rear garden, which is currently mainly set in lawn with herbaceous borders and a sandstone patio outside the house. The front garden has space to park a number of cars.

Sycamore Road is a cul-de-sac between Greenfield Road and Trees Road. It’s a popular location for families with 10 schools in walking distance, says the owner, and close to UCD.