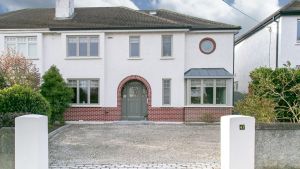 When the owners of a house in Mount Merrion bought it 20 years ago, it was pretty much in its original condition; one owner had lived in it since it was built in 1950. They embarked on a major renovation in 2003, while their children were still young. Now the large family-friendly house in a cul-de-sac has two reception rooms as well as a largely open-plan kitchen-cum-family room/diningroom at the back of the house and a converted attic used as a home office.

Number 47 Glenabbey Road, Mount Merrion, Co Dublin, a 209sq m (2,249sq ft) semi-detached four-bed, is for sale through DNG for €1,145,000. About five years ago, all the windows were replaced with Carlson AluClad windows, the front door was also replaced by Carlson, the bathrooms were upgraded and the garden was landscaped.

The owners created a single-storey extension across most of the back of the house and added a second storey to an extension the previous owner had built at the side of the house. Pictures and a virtual tour of the house show a front door with stained glass panels opening into a hall floored with large white tiles leading to the kitchen/family room/diningroom.

The kitchen area is separated from the rest of this open space by a wide counter. It’s floored with the same white tiles as the hall, has cherrywood units and a door to a gated side entrance in a corner of the kitchen next to a washer and dryer. The family room/diningroom is floored with dark timber and has floor-to-ceiling sliding doors opening into the back garden.

Upstairs there are four bedrooms – three doubles and a single/small double – and a fully-tiled family bathroom. The main bedroom, looking over the back garden, has a walk-in wardrobe which opens into a fully-tiled ensuite shower room at the front of the house.

The attic upstairs has a Velux window and is fitted out as a study.

The back garden has been landscaped to create a large stone patio and a slightly curved lawn edged by herbaceous borders; there’s a metal garden shed at its end. There’s room to park a number of cars in the gravelled front garden.

There are three entrances from Glenabbey Road into Deer Park, the 32-acre public park that’s a prized Mount Merrion amenity; it has a tennis club, several sports pitches and lots of paths for walking/jogging. Number 47 is the second-last house near the bottom of the cul-de-sac, near the junction with South Avenue.

Sandymount semi just a stroll from the Strand for €1.1m