Little piece of England remade in technicolour in west Cork

Landmark Red House in Castletownshend with superb sea views on market for €1.45m 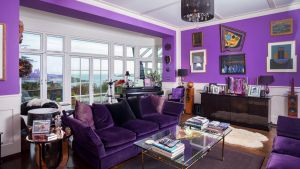 The Red House is quite a landmark in the sleepy village of Castletownshend, near Skibbereen in Co Cork. Records from the Dictionary of Irish Architects show the house was designed by architect Arthur Hill, who also designed some other Cork landmarks – most notably the Turkish Baths, the west wing of the Crawford Art Gallery and many of the Munster and Leinster banks throughout the county.

It was built in 1895 for the Cairns family an English family who imported the red bricks from London because Mrs Cairns refused to move to the village unless the house was an exact reproduction of her London home.

The property was subsequently sold to Col Edmund Aylmer and his brother Gerald, both English bachelors who hailed from Walworth Castle in Durham.

Edmund fought in the battle of Tel-el-Kebir in Egypt and in the Boer war in South Africa. He and Gerald – a big game hunter – chose Castletownshend for their retirement. Presumably the location was chosen as the very antithesis to the wilds and torrid humidity of Africa.

The current owners are the Roitman-Lenherr family, who bought the house in 2005. “It was laid out as three apartments then, and we eventually purchased all three to turn the house back into a family home,” says Mark Lenherr, an international property developer and managing director of E3 Property.

One of the reasons for buying the house was that Lenherr’s in-laws – Volf Roitman, a renowned Uruguayan artist, sculptor and architect, and his wife Shelley, a writer and film producer – had moved to Castletownshend to live in the 1990s.

“We purchased the property for €1.1 million and subsequently invested more than €1.5 million restoring it; we brought a team of 12 carpenters, who lived in the village for two years, over which time we rebuilt the entire property,” says Lenherr.

“The house was then valued at €4 million, so we saw it as an investment, but now my in-laws no longer live here [Roitman died in 2010] and we don’t have the time to visit,” he says.

Every room in the 445sq m house is a different colour – from the red hallways, to the black bathroom and a rather striking purple drawing room. The colour scheme created a gallery backdrop for the Roitmans’ art, which hangs throughout the property. The dining table in the kitchen was custom-built to showcase artworks under a plate of glass.

The entire house, which has six bedrooms and six reception rooms, has a hidden technology system: “We were working on high-tech homes in Knightsbridge at the time, so the house has cutting edge technology – we can control the light, heat and alarms from our homes throughout the world,” says Lenherr. All sockets and controls are hidden behind panelling throughout the house in a bid not to detract from its Victorian heritage.

The property on 0.5 of an acre is on the main street in the village, with superb sea views from all rooms to the rear.

Volf Roitman who lived here until his death, helped establish Madi – the international abstract art movement worldwide. The goal of Madi is to be “rigorous, inventive, gay and ludic” and The Red House, with its bold colours and state-of-the-art technology, echoes this sentiment.

It is on the market through joint agents Sherry FitzGerald Country Homes and Sherry FitzGerald O’Neill, with an asking price of €1.45 million, a price that reflects the craftsmanship, location and super views.