16 Wellington Road was built in 1850s. It is in walk-in condition and has period details intact 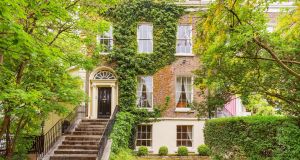 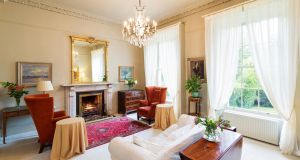 There are matching marble fireplaces, centre roses, elaborate cornicing and sash windows with working shutters in the interconnecting reception rooms. 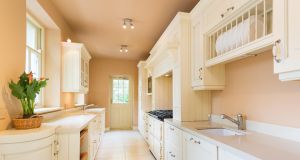 The long narrow kitchen in the extension at the side of the house. 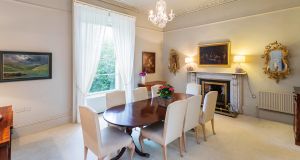 Wellington Road, a wide, leafy relatively quiet road, is one of the most sought-after addresses in Dublin 4. 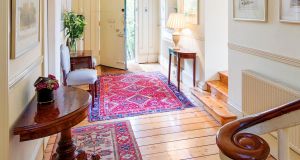 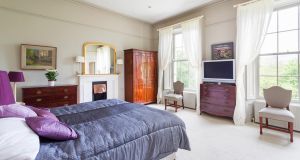 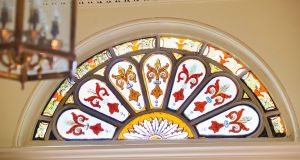 16 Wellington Road has most of its elegant period details intact. 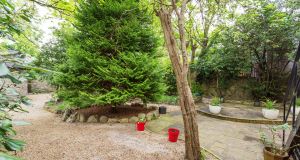 A large end-of-terrace house on Wellington Road in Ballsbridge was once offices for its former restaurateur and auctioneer owner. Fifteen years ago – shortly after selling their family home on nearby Raglan Road to Denis O’Brien for €7 million – the owners moved to live in France, but bought 16 Wellington Road and converted it from offices back into a home.

Now 16 Wellington Road, a 303sq m (3,265sq ft) four-bedroom two-storey over garden level house is for sale through Sherry FitzGerald for €3.75 million.  It is close to the former home of the late PR maestro PJ Mara, which went on the market in February this year with a price tag of €2.75 million, and has just gone sale agreed.

The refurbishment of number 16, on the corner of Wellington Road and Elgin Road, involved building a narrow extension to the side of the house, creating two new kitchens, one on the ground floor, and one at garden level as well as smart en suite bathrooms in three of the four double bedrooms. It’s an unusual layout, providing fairly self-contained accommodation at garden level, and new owners may want to reconfigure it.

The house is in walk-in condition: built around the 1850s, 16 Wellington Road has most of its elegant period details intact. There are matching marble fireplaces, centre roses, elaborate cornicing and sash windows with working shutters in the interconnecting reception rooms on the right of the front hall.

Three steps on the left of the hall lead up to the long narrow kitchen in the extension at the side of the house. It’s smart, with cream units, polished granite countertops and an Aga; there’s a booth-style eating space at one end and at the other, a door opening to steps down to the rear garden.

There are two large bedrooms on the first floor, one with a huge modern en suite in what was a bedroom. A room on the top return is described as a laundry room, but could be another bathroom or a study.

The ground level has two double bedrooms, one en suite, a large livingroom, a smart Siematic kitchen, utility room and a bathroom.

A very large fir tree at the centre of the rear garden is one of a number of mature trees: the garden is laid out in patio flags and gravel. Electronic gates open into a good-sized offstreet parking space at the end of the garden.

Wellington Road, a wide, leafy relatively quiet road, is one of the most sought-after addresses in Dublin 4: number 75 sold in October 2016 for €3.415 million; its asking price was €2.25 million. Number 10, which went on sale in January for €3.25 million, is understood to be sale agreed above that figure.

Period homes in a tech neighbourhood: two to rescue on Pearse Square from €600k
9 Ferry skipper a seaman since age 12
10

The old country: Get ready for an ageing Ireland
Real news has value SUBSCRIBE