Kilkenny manor with an attic fit for a princess

Located near Kilkenny City, the 18th-century Bonnestown House has gone on the market with an asking price of €1.1 million. Video: Sherry Fitzgerald 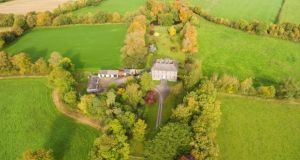 A long straight avenue leads to the wide stone steps and front door of Bonnettstown House. In a couple of weeks’ time this will be carpeted with bluebells, and the lime trees will be in bright green leaf. Kilkenny city centre is just minutes away, but this is another world.

And even though owners Michael and Annette Hogan rewired, replumbed, redecorated and even replaced the floors when they bought the house just over 30 years ago, it is still absolutely rich with history.

They had been looking for a home in which to raise their family (now all grown up and moved on, hence the sale), and even though Michael was local to Kilkenny, he hadn’t known of the house.

“It has only ever had three owners,” he says. “The same family had been living here for more than a hundred years. The Knox sisters were the last of them.” While much loved, it had been a bit of a wreck.

“We were younger,” says Michael, a solicitor. “I had great ideas. Everyone was telling us we were mad, and we probably were.” Mad or not, they brought a beautiful house back to glowing life.

Walk into the hall and while the wide sweeping staircase is impressive (it is what captivated Annette on first viewing), the house is welcoming. “Yes, it’s kind of amazing for such an imposing house,” says Annette. “There’s a peace here,” adds Michael.

The house currently has five bedrooms, but could easily accommodate more because the existing ones are huge, plus there is an entire top floor which the Hogans didn’t need to use – there’s 850sq m (9,149sq ft) in all.

“A Russian princess lived up here,” Michael mentions, before starting at the beginning, when the house was built in 1737 for Samuel Matthews, Mayor of Kilkenny. His name and the date are inscribed on either side of the façade. And if that’s not ancient enough, there’s also the ruin of an 11th-century castle in the gardens (28 acres, in paddocks and planting, plus a lake).

Anyway, according to Michael, the exotically named Commander Geoffrey Marescaux de Saubrait was a cousin of the Knox sisters. He had roamed the capitals of Europe between the wars, and came home with a White Russian princess, Lubov Glebov – whom he installed in the attic.

He’d also picked up a hitchhiker who turned out to be Andrew Bush, who would go on to become a well- known photographer. Bush’s book on Bonnettstown House is available on Amazon – and it’s a fascinating peek into a then-dying era.

Downstairs is a lovely drawingroom, marvellous diningroom, wood-panelled study and warm, bright kitchen. The basement still holds the old wine cellar, and sundry rooms that a buyer could do interesting things with – plus a fifth bedroom (en-suite).

Upstairs, Michael points out the window from which one of the Knox sisters would lower a bucket of oats to feed her horse, so she could get another half hour’s sleep before hunting.

Outside, the gardens are gorgeous. Annette, who restored them, learned gardening with Corona North at Altamont, and much of the mature planting comes from there.

There’s also a charming stable yard, and paddocks. In all, this slice of heaven will set the buyer back €1.1 million. According to Roseanne De Vere Hunt of Sherry FitzGerald, who are joint agents with O’Keeffe Auctioneers of Kilkenny, the appeal lies in the charm of the house, coupled with its convenient location. “There are few country properties on the market at the moment with the combination of these ingredients,” she says.