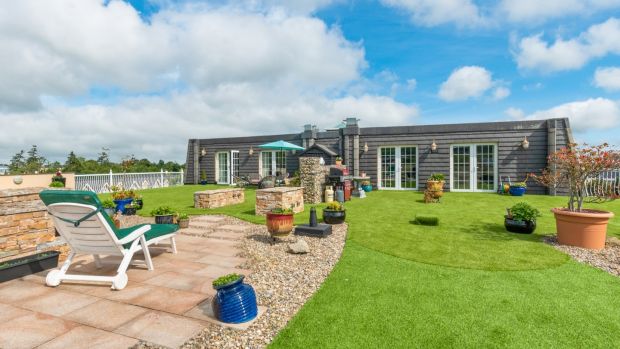 When Noel and Jacinta McMahon, who have retired after making their name with Joels restaurant on Naas Road in Dublin, at Newlands Cross, were looking to trade down and couldn’t find what they wanted, they customised part of the top floor of an apartment complex in Saggart to fit their needs.

The three-bedroom penthouse, complete with putting green on an enormous terrace overlooking the treetops, extends to 390sq m (4,200sq ft) and has a cinema, gym and a chef-standard kitchen. The outdoor terrace is almost the same size again and is divided up into different zones allowing one to follow the sun all day long.

The name of the restaurant, which the couple opened in 1991, is an amalgamation of their two first names. It is a hugely-popular venue for family events such as communions, confirmations and birthdays.

Demand was such that to accommodate the queues lining up outside they decided, in 1997, to knock and rebuild the restaurant to double its original size. The project was completed in 11 weeks, Jacinta says, and the Jetsons-like eatery by Stephen Oppermann, of Oppermann Associates, is now a design landmark.

When the husband-and-wife team ran it they were doing 5,000 covers a week. Chef Noel manned the kitchen while Jacinta was in charge of front of house. The couple met in the Kerry Gaeltacht and have been married for more than 40 years.

They sold the business to hotelier Louis Fitzgerald for just under €10 million in a deal that included adjoining lands on which the businessman built his eponymously-named hotel. The deal was struck in the then home of the McMahons, a 6,000sq ft space complete with swimming pool, situated up in the hills above Saggart. The sale prompted the couple to make a fresh start, with a bit less land to maintain.

“When we retired we didn’t want to be cutting grass,” says Jacinta of the maintenance of the 1.5 acres of lawn in their former home. “We didn’t want a regular apartment. This was trading down,” Noel says.

It was their daughter who told them about the nearby apartment complex that was under construction. They approached the developer, looked at the existing plans and decided that by putting four typical-sized units together they would be able to get the home of their dreams.

Bathroom locations were moved and new doorways cut from the solid concrete walls to configure the space as it is now. Noel estimates the property and its fit-out cost about €1.8 million.

The interior and furnishings are American in style. “We couldn’t get anything to fit,” Jacinta recalls. Having spent a lot of time in the States, it was at Disney that they got the idea to super-size Joels. And already owning a home outside Orlando, they bought from a supplier they already knew – Furnitureland South – the self-proclaimed world’s largest store of its kind in North Carolina.

Fans of a contemporary look might not like it, but the point here is that you can pretty much fashion the interior any way you want. What is in situ is underfloor heating throughout, solid-concrete walls and some 16 inches of concrete between you and the floor below, giving you a really solid build that boasts an impressive A3 Ber rating.

The residence has all the luxuries of premium homes in cities such as London, New York and Hong Kong. The six-seater cinema room is equipped with an easy-to-use lighting and programming system that does not require a PhD in engineering to use and well-upholstered reclining leather armchairs.

The home has everything you need. “It’s like a very big house,” explains agent Ronan Healy, but all on the one level.

Its facilities include a gym with a west-facing balcony off it, a vented laundry room, and a huge kitchen with first-class appliances befitting its chef owner. These include a four-hob Viking cooker with separate fish grill and griddle, a large oven, big enough for any Christmas turkey, and a second for baking, a huge Viking fridge freezer, with separate chilling temperatures for all the goods stored within and Fisher Paykel dishwasher drawers, ideal for smaller loads.

Secreted behind a wall of oak is a pantry the size of a standard kitchen where you can find space for vases and special occasion tableware, rare in any home. The formal dining room is hived off the main kitchen. There’s a bar, the first thing you see at the end of the property’s long hall, and a wine fridge that can fit more than 50 bottles.

Across the hall is the sizeable living room. The dual-aspect space is big enough to take a baby grand piano and has a wood-panelled study off it, accessed via glass double doors.

Each of its three bedrooms faces the rising sun and each is the size of an upscale, luxury hotel room and comes with similarly high level of bathroom fit-out, complete with brown, emperador marble tops. High-end cabinet-maker Alan Brown did the wardrobes and all of the interior joinery.

The master has a balcony that is twice the size of any of the other five units on this top floor and overlooks what had been one of two golf courses at CityWest. A chaise longue and well-upholstered leather armchair and matching ottoman offer places to read the paper. At night you can see the city lights winking from the master bedroom. In its en suite there are his-and-hers sinks with plenty of distance between them, a double-ended Jacuzzi bath, a separate shower big enough for two and with room to sit down as well as its wc situated behind a door for privacy.

And then there’s the terrace. You can access the enormous, 371sq m (4,000sq ft) space from both kitchen and living room. Out here you’re surrounded by greenery, tree tops and swooping swallows and swifts; the development was very well named. Laid out in artificial grass, it includes a putting green where Noel practises his game.

While the couple now spend about six months of each year in the States, they have just started work on a small cottage they have owned for years in Kinsale where they now want to spend their time when in Ireland.

The property, which is asking €950,000 through agents Sherry FitzGerald, comes with communal parking for two cars and its own private lift with direct access to its floor.