Inside Gorse Hill: the house behind the O’Donnell saga

The controversial O’Donnell mansion on Vico Road has had a €70,000 facelift and is on the market for €8.5million

On April 29th, 2015, solicitor Brian O’Donnell, former owner of Gorse Hill, walked into the Bank of Ireland AGM and threw a set of keys with a keyring marked “The Bloody Keys” at BOI chief executive Richie Boucher. Video: Bryan O'Brien 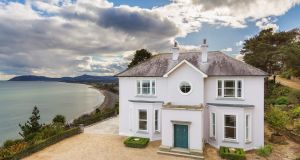 Gorse Hill: “Those with €8.5million to spend buying it are unlikely to be overly bothered by its controversial recent past.”

It’s almost two years since solicitor Brian O’Donnell, former owner of Gorse Hill walked into the Bank of Ireland AGM and threw a set of keys with a keyring marked “The Bloody Keys” at Bank of Ireland chief executive Richie Boucher.

It was a high-profile stunt pulled during the procession of court cases and appeals in the long battle O’Donnell and his family fought to retain their lavish family home on Dublin’s Vico Road, after the family had amassed debts of €71 million with Bank of Ireland.

A year later, O’Donnell enlisted the unlikely support of the self styled New Irish Land League to support the family’s plea against eviction from one of the finest coastal sites in the country.

Over several weeks the public were treated to daily media reports and footage from outside the electric timber gates and high cut stone walls of the property, as the Land League mounted a staunch defence of the family against eviction.

At one point broadcaster Vincent Browne managed to breach the perimeter though he failed to gain access to the house.

The sorry saga finally ended last October when a Court of Appeal dismissed an appeal by the O’Donnell family against a decision to lift a legal bar on the sale of the property.

Now the 10,220sq ft property on two acres, located a couple of doors down from Bono, is on the market for €8.5 million through joint agents Sherry FitzGerald and Knight Frank on behalf of receiver Tom Kavanagh of Deloitte for Bank of Ireland.

Apart from a few remaining boxes of possessions piled in one room, every effort has been made to paper over any evidence of the family who once lived here and to “neutralise” the interiors.

It looks as though at least €70,000 has been spent to prepare the house for sale. Muriel Simpson of House and Garden Furnishings has spruced up the interior, walls have been painted inside and out, and the outdoor pool has been covered with decking.

The smell of fresh paint – mainly white – permeates the air, and pilling from newly laid carpets – mainly cream – is everywhere. Throughout the ground level black paint has been applied to the hardwood flooring in an apparent effort to tone down the original wood floors

For a newly built house, dating from around 2000 – the original house was purchased for £1.055 million in 1997 – Gorse Hill is well built to a simple design reminiscent of the symmetry of the Georgian era. Opening off the modest travertine-tiled front porch is a wood-floored double-height corridor, with chandeliers along its length, that divides the entire ground floor.

On the left is a smart dual aspect library/study and further along are the two main interconnecting reception rooms. What’s immediately striking in both formal reception rooms is the elaborate decorative ceiling plasterwork overhead, of a scale traditionally found in only the grandest of period properties.

Two Adams-style fireplaces, floor-to-ceiling windows and a central bay with French windows out to the patio complete the scene.

Outside, from the top of sweeping granite steps are panoramic views of the bay, from Dalkey Island on one side to Bray Head and Killiney beach on the other.

The separate custom-built kitchen has had its 1990s buttery cream colour scheme replaced with a more contemporary China Blue. Bespoke cabinetry surrounds a central wood-topped island, while the space where the Aga once stood has been filled in.

From here, more floor-to-ceiling windows and doors lead out to the pool area, and a separate summer house with crema marfil flooring and six sets of French doors.

For such a carefully considered property, the bathrooms are a letdown. All of the six bedrooms are en suite, and the main upstairs and downstairs toilets are each the size of a bedroom, but the showers are quite cramped and of 1990’s vintage, and the sanitary ware is also dated.

A continuous sweeping staircase leads to the upper level, and an impressive bow return with a series of tall narrow windows overlooks the driveway. More elaborate ceiling plasterwork extends from here into a lovely open library/ morningroom with views across the bay.

A real design plus is that four of the six bedrooms have exceptional sweeping sea views. The master bedroom, with two massive bay windows, dwarfs the king-size bed at its heart. Off it is a bespoke dressingroom with extensive built-in cream wardrobes painted with gold detail. It is probably the only room in the house with no natural light. The main bathroom on this level has a sauna.

The orientation of the site is southwesterly and the gardens wrap around the main house, falling down to the rail track below. An outdoor tennis court, a separate gym set into the hillside and a gazebo feature amid various walkways and relaxation zones within boxed hedging and Scots pines. There are vacant spaces where presumably further garden features and statuary once stood.

Those with €8.5 million to spend buying Gorse Hill are unlikely to be overly bothered by its controversial recent past. The buyer will see a site on two acres in an area where it has become exceptionally difficult to secure planning for any kind of development. Selling agent Simon Ensor of Sherry FitzGerald says he had interest in the property as far back as two years ago.

“There won’t be a huge volume, but already there are probably about six parties interested in viewing it. The attraction is really in the footprint of the house and the waterfront setting.”

According to Rena O’Kelly of Knight Frank, comparable properties in the area include Sorrento House (sold for €10 million), the recently sold Beulah (€6 million) and Inniscorrig (asking €8.5 million), each of them commanding about €1,300 per sq ft. At €8.5 million, Gorse Hill is coming in at €832 per sq ft.

Doubtless the receiver can’t get shut of this property quickly enough – the maintenance and security alone are costing a fortune – but with the property valued in 2006 at about €21 million and values improving from a 50 per cent collapse it looks like there could be a distance to go yet on this asking price.