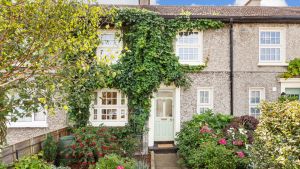 The flower-filled back garden of a house in Monkstown Farm was what first attracted its owner in 2006 – and she hopes that the person who buys it will love gardening as much as she and the previous owner did.

She revamped it, along with the rest of the small former Dublin Corporation house: now a deck steps down on to a patio paved with Lacken stone bordered by a profusion of plants in raised beds around it that include non-invasive bamboo, foxglove, agapanthus, wisteria over the roof of a small shed – and an olive tree beside a small seating area in the spot she calls her Mediterranean corner.

Number 18 Oliver Plunkett Avenue, a three-bed terraced house, is small, at 75sq m (807sq ft) but comes with planning permission for a two-storey extension at the rear that would bring it to 98sq m (1,054sq ft) as well as to create off-street parking at the front.

This would have been the owners’ next project – but then their baby twins were born, prompting the decision to move. It is for sale through Sherry FitzGerald for €425,000.

The previous owner had lived in the house since it was built in 1938 and the current owner restored it in keeping with the style of the time – it has its original panelled doors and in the living room a fireplace with a tall mahogany mantelpiece and a woodburning stove.

The house has been replumbed, rewired, replastered; original floors were stripped as were layers of wallpaper. In 2019, new six-over-six hardwood double-glazed windows were installed and also a pretty luxurious modern shower room downstairs – it’s fully-tiled with very pale green subway tiles and a marble-tiled floor with underfloor heating.

Accommodation comprises a long living room running from the front to the back of the house off the black-and-white tiled front hall. It has some built-in shelving and a door opening to a BBQ area outside.

The kitchen has timber units, mosaic-tiled splashbacks and opens into a small bright dining area with French doors opening into the garden. The whole area is floored with slate tiles.

Upstairs there are three bedrooms: the main double like the livingroom runs from the front to the back of the house and has a restored white cast-iron fireplace. All the rooms have timber floors painted white.

The owner says she’ll be sorry to leave the area, a neighbourhood where some of the original owners still live – neighbours gathered on the green nearby to celebrate a 92-year-old’s birthday recently. And every Christmas they gather at the nearby statue of Our Lady at the junction of Oliver Plunkett Road and Avenue to sing carols. George’s Fish Shop is close by, which attracts customers from all over the area, and just around the corner is the Blue Pool on Monkstown Road.

Level 5 Covid support bubbles: Everything you need to know
3

Covidiots of all ages are giving two fingers to everyone
8