The first phase has 58 apartments for sale off plans, which when complete will comprise 95 apartments and 14 townhouses 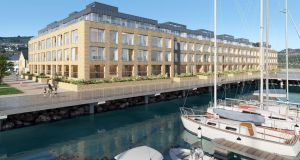 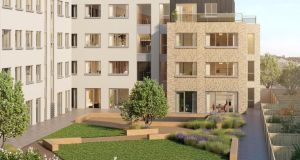 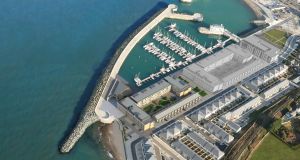 Marina Village is part of a substantial planned development in the picturesque fishing village of Greystones that took 10 years to come to fruition. The project included a new harbour and marina built via a public-private partnership between Wicklow County Council and developers. It represents the State’s largest marine works since the construction of Dún Laoghaire pier in the Victorian era.

Greystones village sells itself. While the journey time from town on the Dart may take an hour, it must be one of the most scenic commutes on the planet. Even a journey by car lifts the spirit the moment you crest the hill into the village and spy the sea.

Now agent Sherry FitzGerald New Homes is launching Rowan Point, the first phase of what will be about 200-units in total. All will have sea views.

Phase one is offering 58 apartments for sale off plans. Predominantly two-bedroom units, they offer varying aspects and layouts.

Designed by architects O’Mahony Pike those in Block J will look out to North Beach and Bray Head. These have a layout that offers an eat-in kitchen and separate living room with one of the two bedrooms, the main with en suite, set to the front of the building.

The views from Block I are east to sea and west to the Sugarloaf. These units have a more open-plan layout. Here an L-shaped kitchen with breakfast bar leads through to the living area, and both bedrooms are located at the rear.

Apartments on the ground and top floors have an outdoor terrace. The ground-floor units overlook a boardwalk that links the 200-berth marina with the headland walk to Bray. Part of the project includes a 14-acre park with dog park. Instead of a balcony, the units on the first and second floors have a “winter garden” providing about seven additional metres of internal space accessed via double doors that double-hinge back. This is not included in the floorspace measure for the units.

Each apartment comes with one parking space. The penthouses come with two. The service charge for one-beds will be €1,800 annually, while two beds will incur a charge of €2,700. While there is no show unit, would-be vendors can inspect the level of finishes in the marketing suite, located in a former showhome on site. Viewing is by appointment through Sherry FitzGerald.

Rowan Point is the first of three apartment buildings and when finished will comprise 109 units of which 95 are apartments and 14 will be three-bed townhouses.

I’ve lived abroad for longer than in Ireland. Was I gone too long?
5